Masks of Yalung are collectibles left by a crazed serial killer referred to as The Goat. He wanders Kyrat, killing those he feels need to be sacrificed to Yalung.

There are 55 masks in total, scattered through Northern and Southern Kyrat. Locations are indicated by a small mask on your map. As you enter the areas where the mask is, a blue circle will appear on your mini map, and you will begin to hear chanting that grows in intensity as you get closer to the mask. The masks can be either removed or destroyed, as it does not matter. Near the masks, there will almost always be a body and a note left by The Goat. The notes usually tell how he sacrificed this certain person for Yalung or that he has been stalking them, but as you remove more and more masks and progress further north the notes get more cryptic. At several points in the notes he acknowledges that you're going around and removing his masks, stating the only reason he hasn't killed you is because "Yalung hasn't called your name".

In one of the last notes, he is notably enraged at your actions of removing his masks, and mentions another person besides you that has also been removing masks. He goes on to threaten both you and the other person, pondering which one to "take to Yalung first". After you remove all 55, the Golden Path will reward you with unlimited Guns for Hire tokens. The identity of the Goat and the second person removing his masks remain a mystery. One theory is that the second person is Hurk. The serial killer might be one of Yalung's disciples. More logically however, is that the goat is a member of the Royal Army or Royal Guard as this would allow him travel across King’s Bridge easily before the 'Key to the North' mission when the Golden Path storms the bridge.

Each mask you collect/destroy awards 250XP. At intervals, special rewards are also given; for example, once you have removed 20 masks, you unlock the "Trooper" signature weapon. 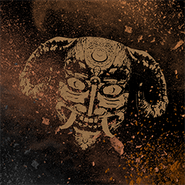 Masks of Yalung in Exorcist Achievements and Trophies