The Molotov, also known as a Molotov Cocktail, is an improvised incendiary explosive made from an empty bottle filled with petrol that is usually activated by a lit cloth sticking out of the bottle.

High (if it contacts flammable material)

Free, at any Fuel Pile.

The Molotov can be very effective in Far Cry 2 due to the large bodies of grass and the speed at which fire spreads. Its effectiveness often depends on conditions. Fires work best on the long, savanna grasses, where it can easily catch and spread over a large area. It is less effective in the jungle. Fire is ineffective on unvegetated ground, and is nearly rendered impotent by rain.

Its best use in combat is to either attack multiple enemies by setting the grass they are in on fire or to flush out hard-to-spot enemies in tall grass by setting the grass on fire. It can also be used to protect the player's flank by igniting the vegetation on the other side of a road---the fire will not cross a road---or when the player is in a non-flammable area, such as standing on a rock outcrop. Molotovs can be used to cover the player's escape by creating a wall of fire. A Molotov thrown into a tree will burn all the leaves off, letting the player see through the tree, while sniping, for instance. It is not recommended to throw a Molotov directly at an enemy standing on non-flammable ground. The result is usually a miss and a wasted Molotov.

None
"The poor man’s incendiary grenade, the Molotov cocktail is nasty, cheap, and effective. Fire in a bottle can be made with any flammable liquid, a glass bottle, and some cloth. Considering how much drinking the locals like to do, it’s no surprise that the stuff needed to make these is plentiful."

The Molotov is a throwable explosive in Far Cry 3. It is an improvised incendiary weapon, effective especially against foot soldiers and vehicles alike. It can set vast amounts of land and buildings on fire, so caution is advised.

In the hands of the Pirates (Pirate Molotov Throwers), Molotovs can become a deadly weapon. Most lethal at medium range, be swift in dispatching the enemy who is using it or you will likely end up taking large amounts of burn damage.

Molotov cocktails are extremely effective against all ground vehicle; a direct hit on the hood or occupants of a vehicle will often result in an instant or quick kill on all occupants, as well as catch the vehicle on fire, which often will result in the vehicle exploding a short while later. Unless you want to run the risk of getting blown up, check whether or not a firebombed vehicle is safe to approach before going to loot. If the vehicle has already exploded, or the engine does not have visible flames coming out, then it is safe. If you can see visible flames emerging from the engine, then wait for the vehicle to explode before going in to look. An extremely effective ambush tactic is to proceed down the middle of a road and hurl a molotov onto the hood of an approaching vehicle. Aim for the top of the bumper..

The Molotov can be used to create a wall of fire to cover the player's escape from a battle. It works best on the long grasses of the southern island.

Heavies are vulnerable to the effects of Molotov Cocktails, making the Molotov a great choice for quickly and easily killing a heavy when using a heavy beatdown is not possible. This is also cheaper and easier than using mines, C4, or grenades.

First-person view of the Molotov.

The Molotov returns in Far Cry 4. Ajay can hold a maximum of fifteen and can throw them while driving. The Royal Army seems to use these, mostly the Molotov Thrower of Royal Army. Other than that, their role is similar to that in Far Cry 3.

First-person view of the Molotov. 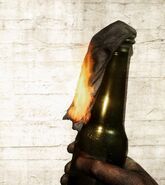 Close-up of the Molotov.