Golden Path
Sergeant Natesa is the Golden Path commander who planned the assassination of Royal Army Private (probably First Class) Vora, a Royal Army Assaulter Commander, which was carried out by Ajay Ghale when Rochan Brick Co. Storage outpost is taken over.

Since she is a woman, it's likely that she joined the Golden Path after Sabal and Amita became new leaders, as they as changed the rules after the death of previous Golden Path leader Mohan Ghale, who didn't let women join despite the Tarun Matara Ishwari Ghale demanded otherwise.

While she has the exact same appearance and voice as the Golden Path soldier who instructed Ajay to break the stalemate between Sabal and Amita through Balance of Power mission, it remains unclear whether they are the same person or not.

"URGENT: Royal Army Attacks":
"Our scouts have seen increased Royal Army presence since the extraction of Ajay Ghale from De Pleur’s compound. My last report from the camps southeast of Banapur suggested that they had intercepted intel on a major attack being planned by the Royal Army. The camp holding the intel was attacked last night, the other is expected to be attacked at any moment. Please send whatever help you can before it is too late.
-Sgt. Natesa" 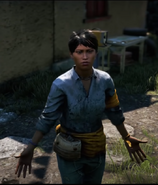 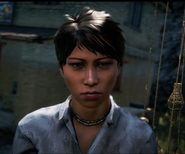