Where It All Began (Far Cry 5)

Nicholas "Nick" Rye is a pilot living in Hope County and an ally to The Junior Deputy during the events of Far Cry 5. He is also the husband of Kim Rye, and the father of Carmina Rye. He is the owner of Carmina, a seaplane that has been passed down through his family.

Nick is a lifelong mechanic and bush pilot from a family of distinguished military airmen, who "flew in the war so [Nick] didn't have to". Unlike his grandfather and father, Nick refused to enlist in the military, causing a strained relationship with his father. He is also a crop-duster by trade.

Nick's grandfather was the original owner of the plane Carmina, which he used to transport mail for the Postal Service. His father used it to charter wealthy people around in the Valley. Nick was the one to add machine guns onto the plane.

With a daughter on the way, and Eden's Gate at their door, Nick steels his courage and sides with The Resistance and the deputy in order to protect his family.

Nick is met at his home and business. After the deputy helps him secure the grounds, and quickly realizes that the Cult has taken his plane, Carmina, during the assault. He plans on leaving town once he can get the plane back, as his wife Kim is pregnant and he can't bear the thought of them coming to harm Kim, or his child growing up fatherless.

He tells the deputy where to go to retrieve Carmina, and once the deputy retrieves it, he instructs the Deputy on the controls for planes (serving as an impromptu tutorial if the player has not flown before). After bringing the plane back, Nick plans to leave, but Kim refuses to go, saying that Hope County is their home and their livelihood, and asks if Nick really wants to abandon his family's history in the area, let alone give up his dream of leaving the business to his daughter. While Nick initially protests that they're going to have a son, Kim remarks that the sonogram says otherwise. Nick then jokes about having to change the name of his business, Rye & Sons Aviation.

Before things can get much further, the cult makes another attack, and Nick takes his plane to the sky to provide air support, while the deputy fights on the ground. Realizing that they must fight to protect their home, Nick joins with the deputy.

Kim goes into labor soon after, requiring Nick to help her while the deputy drives them to the midwife. All the while, Nick and Kim snipe at each other, and Nick surprises her that he was reading up on dilation and other pregnancy-related topics so he could help. After the baby is born, Nick gives the deputy the honor of being their daughter's godparent after all they've done for them.

Nick is captured, along with the other residents of Fall's End; Jerome Jeffries, Mary May Fairgrave, and after they arrive, the deputy, are all tattooed with their sins. In Nick's case, Greed - as he refused to give up his plane and business to the cult - is tattooed onto his chest.

When John asks if Nick will submit to atonement and bluntly refuses, John whispers something into his ear, which affected Nick so dramatically that he immediately "atoned", causing John to knock Nick to the ground and painfully sever the tattooed flesh and staple it to the wall.

Some time later, when the deputy is in a dogfight with John Seed, Nick will provide "wingman" backup for the deputy as revenge for the chest tattoo and subsequent severing of the flesh. When John yells at Nick through the plane's radio channel, Nick in turn calls him a "demon" and how he plans to "send (him) back to hell" for his actions.

Nick will eventually kill John himself if the The Junior Deputy doesn't do so. Thus getting revenge for the torture inflicted on him by John and the threatening of his family.

After John is killed, Nick joins Deputy Hudson, Mary May, Pastor Jeffries, and the deputy at Spread Eagle Bar in celebration.

In the finale of the game, Nick appears under the influence of Bliss as are many of the supporting characters.

If the player refuses Joseph’s offer, he will become hostile and attack, whereas the player will need to revive him in order to clear his mind. After defeating Joseph, he will last be seen running away as nuclear explosions destroy Hope County.

If the player chooses to walk away, Nick and the others under the effects of Bliss will enter the church peacefully, and allow the others to leave.

Nick takes the role of the player character in the Lost On Mars DLC.

Nick Rye the “King of the Skies” is ready to go –literally - above and beyond, to discover uncharted territories. Once you’re stranded on the red planet, your mission is simple: stop the Martian Arachnid invasion and get back home safely.[1]

After the nuclear holocaust, the Rye family tried to settle back into their old family home. When the Highwaymen tried to rob them of their home, Nick fought back, earning the Highwaymen's ire. Nick began repairing the Carmina in order to gift it to his daughter Carmina Rye for her birthday. Nick was taking the Carmina for a test drive when the Highwaymen ambushed and kidnapped him. Nick was held captive in a Highwaymen camp near the old water plant and was coerced to repair the Highwaymen's vehicles. The twins -- Mickey and Lou—wanted him to repair the Carmina for them and also make a replica so they can both have planes. The Security Captain rescued Nick and drove a wingless Carmina to get away from their pursuers. Once in Prosperity, Nick has a happy reunion with his family.

Nick can then be found heading Prosperity's Garage facility.

In the Far Cry 5 trailer

Nick as he appears in Far Cry 5 key art 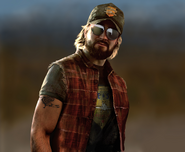 Nick and Carmina in Challenges Guns for Hire Total kill 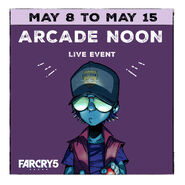 Nick, as a child in the Arcade Noon comic. 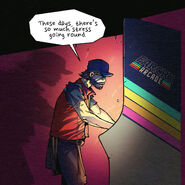 Ditto, as an adult

Nick, as a child, with parents fighting. 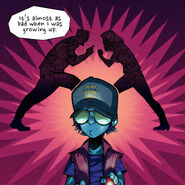 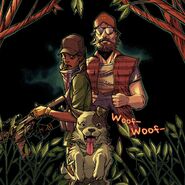 Nick, in the Friendly Fire comic.

Nick is Wanted by the Cult, for being a Sinner.

Nick while not in his aircraft

Nick and Brobot in Lost On Mars Credits Scene

Nick: Dammit Kim! I'm not good at comin' up with pet names on the spot, you know that.