The PKM is a Soviet/Russian light machine gun in Far Cry 2, Far Cry 3 and Far Cry 4. 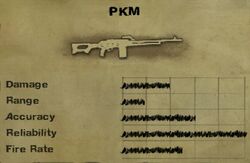 The PKM is a light machine gun featured in Far Cry 2.

This weapon is a very nice supplement to any primary weapon. Its large magazine size allows the player to take out several enemies before having to reload. In addition, its large ammunition capacity ensures that the player is unlikely to run out of ammunition. The PKM is also very durable, which makes it even more useful, especially as a backup weapon for a sniper.

However, it has extremely high recoil, especially when hip-firing. Burst-firing is a necessity in order to be accurate when attacking a distant target. It is strongly recommended to purchase the accuracy upgrade in order to reduce the recoil.

The upgraded PKM is an excellent all-around special weapon — it has moderately high damage, a decent rate of fire, good accuracy, more manageable recoil with the Accuracy Upgrade, and can last for over 1500 shots with the Reliability Upgrade. It becomes an extremely powerful, balanced, all-purpose weapon. It is almost instantly available to the player, as it can be bought in Weapon Shop right after finishing the tutorial.

Although it has much higher recoil than the M249, the PKM is superior in its reliability. The PKM (along with the AK-47) is one of the few weapons in Far Cry 2 you can trust for long periods of use. This, combined with the fact that the PKM can be purchased and upgraded for relatively cheap, means that the PKM is still a worthwhile weapon to use even if the player has unlocked the M249.

"The PKM is a powerful, light-machine gun with solid accuracy and range. It carries a massive 100-round box of ammo, but takes time to reload."

"The PKM is a light machine gun from Russia. Chances are you’ve seen photos of these being held by grim-faced rebels, insurgents, and bodybuilders in glossy magazines. This big gun is powerful, reliable and hard to miss."

The PKM returns in Far Cry 3.

This weapon will become free after deactivating 4 Radio Towers.

It has a manageable fire rate that will saw down enemies quickly, but its long-range accuracy is not superb. It has a 100-round belt box that allows sustained fire and has a lengthy reload time. It is ideal for early game defense against animals such as bears. The PKM can easily kill pirates in 1-2 hits, making it one of the best weapons for large battles early in the game, such as outposts and the "Medusa's Call" mission. It can even down privateers very quickly, although you would be better off with the MKG by then. It is also ideal for killing heavies, as the constant, heavy damage will leave them defenseless as they fall to a taste of their own medicine.

First-person view of the PKM.

Iron sights of the PKM.

It has heavy damage, a large magazine, and a high fire rate, along with decent accuracy. However, it has massive recoil, which, when combined with its obtrusive iron sights, makes aiming very difficult. As such, it is recommended to hipfire at closer ranges, and try to burst-fire at longer ranges. Its reload is a little bit longer when compared to the other LMGs, though not by much. It can be found on Heavy Gunners or bought from the store after the tutorial. Overall, this gun is an excellent early-game choice.

The signature version of the PKM is called the Driller, which is only available with the game's season pass. If the player has the season pass, the weapon is unlocked after the player is able to start exploring Kyrat at the beginning of the game. The Driller has improved damage capabilities over the regular PKM and comes equipped with an extended magazine, and an optical sight, which makes the weapon easier to use as well compared to the regular version.

First-person view of the PKM.

Iron sights of the PKM.

First-person view of the Driller.