Path of the Hunter missions are unlocked by liberating Outposts in Far Cry 3.

They challenge Jason to hunt animals for their skin, or to remove them, so that the Rook Islands are safer. They must be killed using either the supplied weapon or using a melee weapon. Some animals are rare and can only be encountered on these quests. The rare animal skin can be used to make the highest tiers of crafting, like the Extended Loot Rucksack or wallets. The rare animals usually differ from their common counterparts of the same species, but are seldom far away from them.

For more details see Animals - Path of the Hunter.

The Black Panther is a unique variant of Leopard found in in the sub-quest southwest of Dr. Earnhardt's Mansion.

Its pelt, the Black Panther Leather, is used in Crafting to create an Extended Syringe Kit.

A rare Golden Tiger can be found that must be killed with a bow in Rakyat tradition.

Its hide, the Golden Tiger Leather can be used in Crafting to create an Extended Ammo Pouch.

The Undying Bear is a rare bear that can only be found on a Path of the Hunter mission, unlocked after liberating the Cradle Gas Outpost, to the east of Calvary Point. It is a normal bear, except that it is covered in many bloody scars and wounds, which, as said in the journal entry, is either from those who tried to kill it, or a disease known as Eczema.

You are required to kill the animal with a shotgun.

The bear is located inside of a cave near a small camp. Within the cave are several people and animals who were hunted and killed by the bear. It is found in a dark corner, and you will most likely only notice it when it begins to roar, unless you have used a

Once skinned, the Undying Bear Leather can be used to craft the Extended Loot Rucksack. 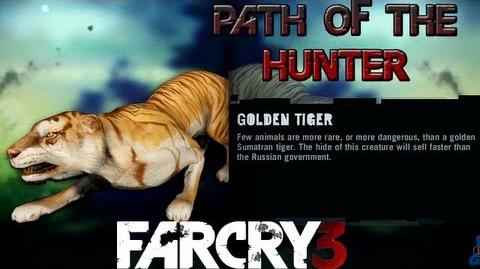 Retrieved from "https://farcry.fandom.com/wiki/Path_of_the_Hunter?oldid=98156"
Community content is available under CC-BY-SA unless otherwise noted.