Start a Wiki
watch 02:14
'Far Cry' Profile: Paul "De Pleur" Harmon
Do you like this video?

Paul "De Pleur" Harmon is the tertiary antagonist of Far Cry 4, who acts as Pagan Min's third-in-command. He is responsible for leading Min's Royal Army and is the governor of the Lowlands region of Kyrat.

“You're Golden Path. A terrorist. A bad guy. And I'm a good guy.”
De Pleur, while torturing Darpan


“Inspired by the plight of Kyrat, Governer Harmon fell in love with our people and customs. He has abandoned his American homeland to spend time here, wanting nothing more than to find peace in the South through brave negotiations with the Golden Path terrorists.”
King Min's Kyrat

De Pleur worked for an unspecified American intelligence agency at some time in the past.

At some point of his life, Paul married a woman named Laura, and later, the couple had a daughter, Ashley.

Although he was a loving husband and father, his job was outsourced and he was forced to "become a desk jockey". This resulted in him becoming disgruntled. As a result, he would then go to the country of Kyrat where he met with the king of Kyrat, Pagan Min. Min found potential in De Pleur and recruited him into his Royal Army.

Eventually, De Pleur climbed the ranks and became the commander of the Army and one of Min's chief lieutenants, next to Yuma. While Min became a recluse, Kyrat was split between different governors who report directly to Min. De Pleur was given control of the Lowlands region of Kyrat and makes his fortune running guns, selling tea and cultivating other illegal crops. He also throws notorious parties in his 'City of Pain.'

De Pleur is first seen in his mansion. He, along with Min, greets Ajay Ghale who came to the country to scatter his mother's ashes. He then leaves to torture Ajay's acquaintance Darpan, a founder of the Golden Path. Ajay manages to escape from the mansion with help from Sabal and is forced to leave Darpan.

Later on, Ajay attacks (he has the option to destroy) a tea factory, containing opium that was supplied by De Pleur and that is to be processed into heroin.

Finally, Ajay is ordered by Noore to find and capture De Pleur. To do so, Ajay infiltrates De Pleur's "City of Pain" where he frees several slaves. Ajay sneaks into De Pleur's interrogation office and frees another kidnapped slave and puts on his mask. After Paul finished talking to his daughter he pulls off the mask and recognises Ajay. Ajay knocks out Paul and carries his body to a nearby vehicle. After Ajay escapes in a car with Paul locked in the trunk, Paul questions Ajay's motives for kidnapping him. Ajay tells him that Dr. Noore sends her regards. Paul laughs hysterically at this due to the fact that he and Pagan killed her family years ago and have sent her false letters from her family (Paul even admits that he wrote the letters with some help from Ashley whom he sees as a future writer, tricking his daughter into believing the letters are to a pen pal).

After this there are two known options, the first option that many players think they must do, is delivering De Pleur to a Golden Path camp; De Pleur screams hysterically due to his daughter calling him and begs Ajay to give him his cellphone back before being taken away by Sabal, Amita and some soldiers. He can then later be found in a cage nearby Banapur Village where he can be freed or you can kill him.The second known option that many players do not realise is to destroy the car and De Pleur along with it, this ends the mission after a phone call from the Golden Path leader.

It was theorized that there was a third option where, Ajay can drive De Pleur to the airport as he does mention it to Ajay while asking him to let him out. This option has been thoroughly tested across multiple platforms, and so far has produced little to no results (with every possible route being blocked by invisible 'mission failing' walls). Due to the open nature of the Far Cry 4 single-player story, it is possible that this was originally an option, but cut due to time constraints alongside many other missing missions such as the "Kyrat Fashion Week". Hints of this can be the lack of a barricade on the final road that splits from the mission, the option to "Interact" with the trunk (this interaction can never be completed but the option is still available), and Paul's suggestion.

De Pleur, though portrayed as a villain throughout Far Cry 4's campaign, is a generous and loyal friend to those that he trusts. He is incredibly violent and sadistic, however, brutally interrogating those that are disloyal to Pagan Min's throne. Outside of his work, he appears as a friendly man (with an admiration for Dr. Phil) who tries to keep in touch with his family. 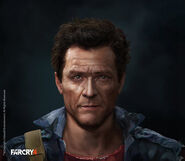 Paul being held in a cage after his capture

Paul's dead body outside of Banapur. 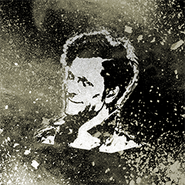 Retrieved from "https://farcry.fandom.com/wiki/Paul_%22De_Pleur%22_Harmon?oldid=85436"
Community content is available under CC-BY-SA unless otherwise noted.