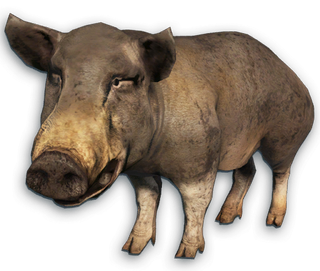 “Pork is not nearly as popular as boar on Rook Island but pigs are much easier to take down. Just don't tell John McCain. He's been looking for pork for years and the man's hungry.”
Survival Guide


Pigs are animals found on the Rook Islands.

Their hide can be used when crafting items. They are quite weak, taking only a handful of bullets to dispense them.

Pigs are often mistaken for Boars. There are several noticeable differences, however. Pigs are slightly smaller, have reddish or pink skin, and smaller visible external tusks. Unlike boars, pigs are not aggressive when attacked, and will always choose flight over fight.

Pigs reappear in Far Cry 5 They can be found in a number of farms all over Hope County. However unlike their "Far Cry 3" counterparts, they do not yield any loot upon death.
Retrieved from "https://farcry.fandom.com/wiki/Pig?oldid=70681"
Community content is available under CC-BY-SA unless otherwise noted.