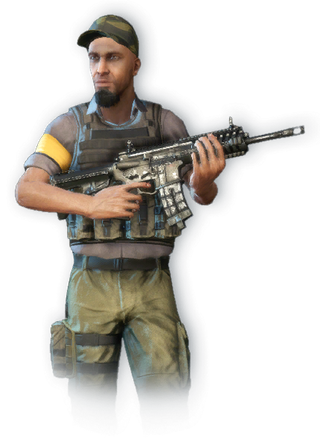 “This is the tale of Hoyt's privateers, hired guns with hearts full of lead. Some hail from armies, some recruited raw, all intend big profits from the end of your life.They are the true power on the island... and finally now I'm sick of this song.”
Survival Guide


The Privateers are a faction of mercenaries based on the Rook Islands run by Hoyt Volker. Compared to Vaas' Pirates, they are much better equipped and organized, wearing tactical gear and using state of the art weaponry. Most of the Privateers have military training to fight professionally. They were hired by Hoyt to protect him and his business. They can be distinguished by their yellow clothing and armour. After the events of Far Cry 3, despite their superior training and better equipment, they were eliminated by the Rakyat. It is assumed that the remaining privateers were captured by either Indonesia or a new, stable Rook Islander government.

The Privateers take the Pirates' place as enemies once the player reaches the Southern Island, being tougher to take down than the latter, but once Jason acquires the Privateer recruit uniform, they will only attack if provoked. It is important to note that even when wearing the uniform, Jason is not allowed to enter high-security command centres or outposts. Also, Jason will not be allowed to attack civilians while wearing the Privateer suit; doing so will cause nearby Rakyat to attack him. The Privateer uniform also has no effect on Vaas' pirates and they will still attack him, indeed, it has been shown in the mission "Defusing the Situation" that the pirates attack the privateers' drug fields which may be related to Jason in privateer uniform having no affect on Vaas' Pirates. Despite that, the Pirates, will try to make Privateers angry at them, which shows the Pirates have no fear or respect for the Privateers.

The Privateers are more dangerous and better equipped than the Pirates. They are a tough faction that will not go down easily without a fight. There are a few less Privateer variants compared to Pirates.

Upon arrival on the Rook Islands, Hoyt provides recruits with a set of rules. They are as follows:

As punishment for breaking the rules, the offender will be placed in a small metal cage, drenched in petroleum and burnt alive. This is witnessed when Jason infiltrates the docks to pose as one of Hoyt's men and gain his trust.

"Grenade, motherfucker!!" - When throwing a grenade.

"It's a grenade, motherfucker !" - When throwing a grenade.

"How about I shoot myself so I don't make you feel bad?" - When attacking.

"Stop, he assassinated Hoyt!" - When doing the final mission after killing Hoyt,

"Where are you, Snow White?" - When searching for Jason.

"Stop wasting bullets and hit me!"

"You're out of your element, Boy!"

"We have tactical superiority, give it up!"

"You're outnumbered and outclassed!"

"How the fuck did all this ?" - When spotting dead privateers.

"Make it easy on yourself, Snow White, and turn yourself in!"

" Come Out Jason you pussy! I will find you!"

"Jason Brody, I'm coming to kill you!" -While searching for Jason.

"You ready for me, Snow White? Because I'm ready for you!"- While searching for Jason.

"Had enough of this bullshit."

"Who the fuck taught you to fight ? Gandhi ?"

"I'm Looking at a massacre here guys !" - When spotting a bunch of dead privateers.

"At least this ain't the island with dinosaurs on it." - When Idle.

"" Nothing but Primitives on this island. Why don't we just bomb them all.""- When Idle.

"Honestly it's called mud." - When Idle.

"Would it help if I stood still?!"

When the player have the Privateer Recruit outfit, other privateers in the compound will make statements such as:

"You're with Sam? Motherfucker's hardcore. You hardcore fish? You gotta be to keep up with Sam, the motherfucking man!"

"That Island is as good as mine, and no one's gonna stop me!"

"Things are getting interesting, Scuttle Butt says that Vaas is dead, some kid named Jason Brody puffed him. I'm impressed... The one who gets Brody down, will get some serious cred"

Privateer Sniper Elite
Add a photo to this gallery
Retrieved from "https://farcry.fandom.com/wiki/Privateers?oldid=96550"
Community content is available under CC-BY-SA unless otherwise noted.