watch 01:55
What is the Project at Eden's Gate?
Do you like this video?
Play Sound

They are highly militaristic with a large arsenal of weaponry to oppress non-believers. However, unlike the past enemy factions of the Far Cry series, they are not as well-armed or well-trained in formal military training as a traditional paramilitary groups like the Privateers, Royal Army (Guards), or Mercenaries.

Despite their lack of military-grade weapons, they are the first enemy to own attack aircraft. However, their aircraft are either modified WWII-era fighters or agricultural planes outfitted with machine gun hardpoints. They are also known to utilize scorched-earth tactics as well as terror/demoralization strategies, destroying farms and other potential supplies of the Resistance, taking hostages, as well as desecrating the cemeteries and graves belonging to the community.

Joseph's siblings all seem to utilize some form of Mind Control to mentally subvert them. Faith uses a drug called Bliss to brainwash prisoners and people who resist the cult she calls "Angels" (who are used as cannon fodder and charge at the cult's opponents with melee weapons), while Jacob uses Mind-Control Music to activate Sleeper Agents. In the prequel, John pours a neon blue liquid that may or may not be Bliss into the river used to baptize new converts to the cult, and Faith adds the same liquid into the tea she gives Sara.

The cult was ultimately right, as the world was ravaged by nuclear fire in the end. While the Project was ultimately wiped out, it would be succeeded by Joseph Seed's new cult, New Eden.

According to The Book of Joseph, the Project at Eden's Gate was started in Rome, Georgia by Joseph after hearing the Voice and recruiting his brothers. After a police accusation over their role in the disappearance of a man, Joseph decided to move the congregation to a rural part of the country, settling on Hope County on accounts of its name and defensibility. Along the way, Eden's Gate continued to build up a large congregation, though being constantly monitored by the police and FBI. By the time they arrived, they were numbering in the hundreds.

After arriving, John was able to use his fortune in acquiring land for the Project, and his legal skills in defending the Project. In the time since, more people joined the project due to its moral code and support system, Faith being one of them.

By the events of Far Cry 5, Joseph had declared the apocalypse imminent, and the Project has moved towards seizing land and forcibly recruiting people to reach its goals.

Secret Ending: With the Sheriff's Department leaving it is highly likely that the cult remained in power and managed to gain even more strength and followers and managed to successfully convert most if not all of Hope County to their cause.

Walk Away: With the Deputy’s departure, Joseph remains in charge with the Brainwashed leaders of the Resistance. Even though a massive amount of his cult were killed and defeated it is likely he managed to strengthen his cause again with brainwashing what is left of the resistance. Some time after however, the US Army is likely deployed.

Resist: As revealed in Far Cry New Dawn. the remnants of the Cult took shelter in the remains of John Seed's bunker in the Holland Valley after The Collapse. Starvation, disease, and a constant threat of flooding nearly destroyed the Cult completely. Years later, Joseph returned with The Junior Deputy and rallied the survivors of Eden's Gate. Together, they all set out North and founded a new group, New Eden.

The Project is made up of a number of cultists of differing ranks. Recently converted members are referred to as "Followers" and are only armed and armored very basically, with some only armed with baseball bats or other melee weapons. The Project's security forces are better equipped and trained than the Followers, and wear heavier clothing and body armor. The most elite are the Chosen, who usually appear in weaponized planes but are also occasionally found supporting other members on the ground. The three basic ranks of the Project are Pistolero, Assault, and Defender. The Pistolero is armed with the 1911 and is the weakest enemy in the game, rarely taking cover and dealing very little damage with their pistols. The Assaulter is the most basic and common enemy in the game, using the AR-C and grenades. The Defender is similar to the Assaulter but wears body armor that gives them more durability and prefers to stay at a distance and use suppressive fire.

Special ranks of the Project include:

Eden's Gate Hunters and The Chosen 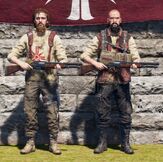 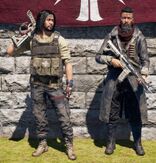 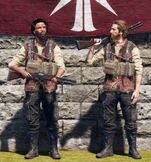 Retrieved from "https://farcry.fandom.com/wiki/Project_at_Eden%27s_Gate?oldid=100356"
Community content is available under CC-BY-SA unless otherwise noted.