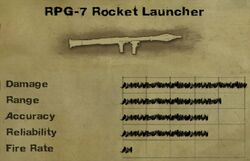 The RPG-7, or Ручной Противотанковый Гранатомёт-7 (Ruchnoi Protivotankovje Granatamjot-7)or(Hand Anti-tank Rocket Launcher 7), is an anti-tank, rocket-propelled grenade weapon. Much like the AK-47, it is very famous, widely produced, and is a signature of guerrilla fighters worldwide.

It is not an uncommon sight and will usually be used to take out vehicles. It fires unguided rocket-propelled grenades. The weapon is reloadable and weighs 7 kilograms (15 1/2 pounds). It is based on a simple steel tube, 40 millimetres (1 1/2 inches) in diameter and 95.3 centimetres (about three feet) long. The middle of the tube is wood-wrapped to protect the user from heat, and the end is flared to assist in blast shielding. The user may be at risk if not taking cover while reloading.

When the Reliability Upgrade is bought the RPG-7 will start to fire defective rockets between the 17th and 24th shot and will eventually break on the 38th shot (seven full bandoleers х 5 rockets + 3 rockets).

Aiming down the sights.

The RPG-7 is a rocket launcher also present in Far Cry 3.

This weapon will become free after deactivating 6 Radio Towers.

It is capable of destroying almost any vehicle in one hit. It can be a useful tool when liberating Outposts, since a well placed rocket or two could wipe out a wave of enemy reinforcements. Players should be aware of the fact that they will get severely damaged when the rocket explodes within close proximity to their position. The RPG-7 is one of the most powerful weapons in the game.

First-person view of the RPG-7.

Iron sights of the RPG-7.

The RPG-7 returns in Far Cry 4. It is unlocked very early on (though relatively expensive). It has high damage, and is very effective against taking out helicopters and Pagan's Wrath jeeps (as they are more heavily armored, and better armed then normal or MG jeeps), making it optimal for whenever you plan to go loud in a fortress takeover. However, it is not as versatile as the GL-94, and the slow projectiles make it hard to hit moving targets (especially helicopters) without significant practice. It is outclassed by the other rocket launcher(s), and should be replaced as soon as a better option (such as the LK-1018) as soon as possible.

First-person view of the RPG-7.

The iron sights of the RPG-7.

The RPG-7 returns in Far Cry 5 as modernized version. It can be upgraded with a scope and several skins. Despite its power, the RAT4 is generally better due to the fact that the RAT4’s rockets can be guided by aiming down the sights and can be upgraded to lock onto any land, water, or air vechicle.

The Rusty RPG-7 is the first Rocket Launcher the player acquires. It's a Rank 1 weapon and quickly becomes of little use. perhaps due to its decayed nature, the reload is noticeably longer than normal.