The Rakyat are tribal warriors indigenous to the Rook Islands archipelago. Their leader is Citra Talugmai.

The Rakyat are the main protagonist faction in Far Cry 3. During the course of the game, Jason Brody will be tasked with helping the natives liberate the islands from pirate and privateer control.

There are two types of Rakyat: Rebel Defender and Rebel Assaulter. Compared to factions such as the Pirates and Privateers the Rakyat are grossly outgunned. What they do have is a passionately methodical sense of honor and an unbreakable determination to free Rook Island from tyrants such as Vaas Montenegro and Hoyt Volker. In the Map Editor, there are more types of Rakyat, Rebel Sniper, Rebel Rocket, Hunter Rocket, Hunter Sniper, and Local Man (who is just a civilian carrying an AK-47). Strangely enough, despite being tribal warriors of a seafaring Malay-Polynesian ethnic group, they cannot swim and will die from drowning if fall into water, just like the Pirates and Privateers.

The Rakyat normally only recruit people from Rook Islands native ethnic group to their ranks, but as they believe that the islands call to the strongest, a few foreigners like Dennis Rogers and Jason Brody are accepted as long as they completely assimilate into their simple, instinctive way of life. The Rakyat still trying uphold their traditional way of life such as practicing survival skills and hunting skills, as most civilians especially in southern islands already moved on with modern lifestyle. 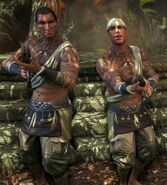