“Sergeant Colt was the pinnacle of the cyber-commando Mark IV series when they resurrected him from the dead. The process left his memories fuzzier than fruit in a frat house kitchen, but his service to Omega Force and loyalty to Sloan kept him busy. That was before the more loyal Mark Vs rolled out, before they deemed him obsolete for Omega Force. Problem is, someone forgot to send Rex the memo…”
Data Console


“Let's show them how Cyber-Commandos get it done.”
Sergeant Rex "Power" Colt


Sergeant Rex "Power" Colt is the protagonist of Far Cry 3: Blood Dragon. He is a Mark IV Cyber-Commando who is part man, part machine, and all-hero.

Rex has a sarcastic and humorous personality, using many one-liners and cynical remarks. While the hero, Rex is also very impatient and enjoys killing, such as when he taunts fallen enemies to "send for a medic so I can kill him too!"

However, Sgt. Colt is also quite humble and refuses to take any credit for being a hero. As he explains to a scientist and later to Dr. Darling, "I'm no hero. I'm just your everyday U.S. Military Mark IV Cyber-Commando" and "No doc. Paintings of crying clowns and dogs playing poker... those are incredible. What I did? That's just the job."

Sergeant Rex "Power" Colt was once a grunt soldier in the United States Armed Forces, serving in Omega Force under the command of Colonel Ike Sloan. Rex is a seasoned war veteran, having served his country in many conflicts, including Southeast Asia and South America.

Rex and Spider served together in Vietnam War II. After dying in the conflict, they were subject to a new and classified government cyborg program to become Mark I Cyber-Commando's. Until the beginning of Blood Dragon, they received multiple enhancements through phases to eventually become Mark IV's.

Although unable to recall much of his own past before receiving his cybernetic enhancements, Sgt. Colt was even part of an operation with Dr. Darling in Quebec, Canada.

The game is set in a fictional 2007, where the world is suffering the aftermath of a nuclear war between the United States and Russia. Rex is an American cybernetic super-soldier. He and another American cyber-soldier named Spider travel to an unnamed island to investigate Colonel Sloan, an elite agent who has gone rogue. Upon confronting Sloan, he reveals his treachery, kills Spider, and knocks out Rex.

Rex is awoken by Sloan's Canadian assistant Dr. Darling, who, disillusioned with his goals, betrays him. Rex teams up with Dr. Darling to overthrow Sloan's plan to revert the world to a prehistoric-like state with his rockets, armed with the blood of the "Blood Dragons" that roam the island.

After liberating bases, saving scientists, and killing animals, Rex fights Sloan's assistant Dr. Carlyle, who has used the blood of Blood Dragons to turn humans into zombie-like creatures called "the running dead". After Rex fights Dr. Carlyle's cyber soldiers and blood dragons, Dr. Carlyle is killed by his own AI, who had been mistreated and acted out of revenge.

Rex then goes into a parallel dimension, where he fights legions of Colonel Sloan's running dead. Upon defeating them and "testing his might," Rex gets the Killstar, an arm-mounted laser gun that gives Rex the power necessary to defeat Sloan, at the cost of his own vitality. Following a training montage, Rex and Dr. Darling have sex, culminating in Darling's abduction the next morning. Rex then makes an assault on Sloan's base with the assistance of the Killstar and later, a Titanium Plated, domesticated Cyber-Blood Dragon, the Battle Dragon.

Rex confronts Sloan. However, because Sloan programmed Rex, he prevents Rex from attacking him. However, Dr. Darling's and Spider's memories remind Rex of his humanity despite his cybernetic nature. With renewed strength, Rex impales Sloan with his robotic hand and fires the Killstar, killing Sloan. Dr. Darling appears immediately after, informing Rex of his success in stopping Sloan's plans, then proceeds to destroy the base. They embrace while looking on at the destruction, only for Darling to focus on the camera with a sinister gaze.﻿﻿

"I made a promise to Lady Liberty, and she taught me that... winners don't do drugs." 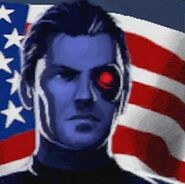 Cropped version of the previous.
Add a photo to this gallery

Retrieved from "https://farcry.fandom.com/wiki/Rex_%22Power%22_Colt?oldid=96060"
Community content is available under CC-BY-SA unless otherwise noted.