Make a Break for It


Riley Brody is the younger brother of Jason and Grant.

Riley is a novice pilot and helps Jason during the game. A very short time prior to the events of Far Cry 3, he receives his pilot's licence, but Jason is unable to attend his ceremony. He is captured by Hoyt Volker at some point and held prisoner. After rescuing Keith Ramsay from Buck, Keith mentions to Jason that Riley was shot and presumably killed by Hoyt. Jason takes this hard, and wanting nothing more than to kill Hoyt personally.

While infiltrating Hoyt's Compound, Hoyt orders Jason, disguised as one of his mercenaries named Foster, to go with Sam and torture a prisoner for information. Jason finds out it is in fact Riley, but has to act like he does not know him, due to the fact Hoyt is watching the whole scene from a security camera in the cell. While Sam rigs the camera, Riley is able to have a brief talk with his brother and be reassured that he would be rescued. Jason is then forced to torture his brother to keep up his cover; punching him repeatedly, and even pushing his thumb into Riley's gunshot wound on his shoulder. Jason has to leave him in the cell under Hoyt's command after the interrogation.

While at Hoyt's poker game, after Hoyt stabs and kills Sam, Hoyt reveals he knows Jason's true identity, and that he knew Riley was his brother the whole time. It is implied he somehow saw the conversation Jason had with Riley when they believed Sam rigged the camera.

During Jason's final fight with Hoyt, Hoyt mentions he should be worried about Riley. He claims he sold him off to a client "in Yemen who likes them young". He is headed to a local airstrip to be put on an aircraft to be shipped off into slavery. After killing Hoyt, Jason fights through many of Hoyt's mercenaries to find and rescue Riley, then they board a Helicopter to make their escape.

The Brody brothers land near Doctor Earnhardt's mansion only to find it ablaze, and the cave their friends had been hiding in collapsed and unreachable. They then encounter Dr. Earnhardt himself, who, with his dying breath, informs them that their friends have been kidnapped by the Rakyat. Riley then pilots the helicopter to Citra's Temple to confront the Rakyat on the abduction, but winds up getting taken from Jason and tied up.

Riley is the youngest of the three Brody brothers and comes off as the most innocent. He is level-headed, evident when he tries to negotiate with two men over Keith pissing them off, at the night club flashbacks. A novice pilot, Riley is adept at flying a plane and learns how to fly a helicopter when he and Jason escape the airfield, where he displays a fearful, panicking side of him when being shot at and pursued by Hoyt's Privateers but gradually begins to get excited over the action and the triumph as he and his brother escape alive from dozens of armed soldiers and vehicles. This in some ways parallels Jason's behaviour when he begins his adventure across the Rook Islands. 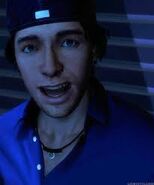 In Survival Guide
Add a photo to this gallery
Retrieved from "https://farcry.fandom.com/wiki/Riley_Brody?oldid=90490"
Community content is available under CC-BY-SA unless otherwise noted.