Leader of the Izila Tribe (Formerly)

Roshani was a commander of the Izila tribe before he pledged his allegiance to Takkar, and the secondary antagonist of Far Cry Primal.

Roshani is a proud but paranoid Izila commander. He leads an impressive Izila fortress that has never suffered any threats from rival tribes. Like many Izila, Roshani has prideful faith in the Izila's place in the world. He's lead a sedentary life and has limited combat experience. He earned his command through charm and manipulation.

Roshani has made enemies among the Izila over the years. He's known as a man who puts himself before all else, including his own people. It's a reputation that could catch up with him one day soon - and he knows it.

While attacking Fire Screamer Fort, Roshani attacks with his forces. Takkar manages to disarm him and attempts to kill him, but Roshani pleads with him in the Wenja language, gaining him some time to say that he will offer his services to them in exchange for his life. Takkar orders him to go with him, but Roshani refuses, saying that the Wenja should come to him; in response, he is forcefully sent into the Wenja camp, and though he pleads for better treatment, Takkar places him with the "Izila beasts." From then on, Roshani gives the Wenja valuable information (forcefully) and soon tells Takkar about the seeds that the Izila use to grow crops. 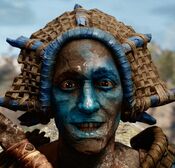 Roshani Render
Add a photo to this gallery
Retrieved from "https://farcry.fandom.com/wiki/Roshani?oldid=99049"
Community content is available under CC-BY-SA unless otherwise noted.