Having a rapid-fire, decent accuracy, and low damage, the MAC-10 is useful as a sidearm to those who favor sniper rifles and other weapons less-useful at close-range. However, the MAC-10 is woefully inadequate at anything beyond close-range, meaning that it lacks the mid-range capability of an assault rifle. When used with a long-range weapon such as a sniper like the SVD, it is advised to either close the gap when an enemy is at mid-range, or fall back to long range.

The MAC-10 will degrade fairly quickly after use, meaning a fresh one should be picked up any time the player visits a store.

It is used by many enemies until Act 2, when it is replaced by the Uzi.

Enemies that use long-range or heavy weapons such as the M1903 or RPG-7 will have a MAC-10 as a fallback weapon for close-range.

From full condition, the MAC-10 will begin to jam between the 360th and 560th shots, and will break completely around 750th round fired. 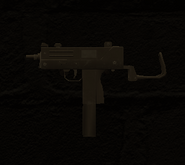 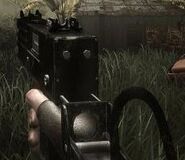 "This subcompact machine pistol will burn through bullets faster than a fake news story gets shared."

The SMG-11 as it appears in Far Cry 5 is a sidearm-capable machine pistol. Due to the smaller size, it is one of only a handful of non-pistol weapons that can be used in the slot, such as the D2, M-79, A99, and Skorpion.

The SMG-11 can be fitted with a suppressor, extended magazine, optical sight, and a weapon skin. An additional green camouflage skin can be unlocked by completing the mission Patriot Acts for Willis Huntley.

The SMG-11 in a pre-release screenshot

"When you've got so much love to give, but you only have one hand"

The SMG-11 returns in Far Cry New Dawn, as the first SMG the Player acquires. It's a Rank 1 weapon and quickly becomes of little use. Perhaps due to its decayed nature, the reload is noticeably longer than normal. Unlike previous incarnations, this SMG-11 has a partial adjustable strap attached directly underneath its barrel.