Aced in the Hole

“I sent them out. Days and weeks went by. No one returned. They're gone. The jungle took them.”
Survival Guide


Sam Becker was a CIA agent posing as a high-ranking Privateer for Hoyt Volker through Rook Islands CIA agent Willis Huntley. Sam appears to be the deuteragonist for the second half storyline of Far Cry 3.

Sam was born in 1967 in the USA while his father, a Navy SEAL, was stationed in Fort Worth, Texas. Then Sam relocated to Germany due to his father being stationed there.

At some point, Becker at a young age joined the CIA where he would become acquainted with fellow CIA agent Willis Huntley.

Some time before 2012, Sam, Huntley, and a team of CIA operatives were sent to the Rook Islands to keep tabs on, and eventually terminate notorious slave/drug trafficker Hoyt Volker. However, Huntley soon lost contact with Sam and the rest when they were sent on a reconnaissance mission in the Southern Island. The jungle "took" them.

Jason Brody soon meets with Becker after being parachuted into the Southern Island (thanks to Huntley) in order to find and kill Volker.

At first Sam looks like a highly aggressive Privateer, but this is later confirmed as his persona to maintain his cover. He joined the Privateers with the sole intention to kill Hoyt Volker but after he lost contact with his handler, Willis Huntley, he was forced to wait until he met Jason Brody, who revealed to be working with Huntley as well.

“I guess he's sitting this one out.”
Hoyt, after killing Sam


With the help of Jason, Sam sabotaged Hoyt's company while earning his trust to get himself and Jason invited to play poker with him. At the game, he planned to kill Hoyt with a knife he had hidden in his boot, but just as Sam signalled Jason he was about to strike, Hoyt stabbed Sam in the neck with a knife of his own, killing him. 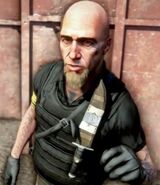 Add a photo to this gallery
Retrieved from "https://farcry.fandom.com/wiki/Sam_Becker?oldid=96511"
Community content is available under CC-BY-SA unless otherwise noted.