Erin Manker
Sara is a main character in the short film Inside Eden's Gate and is mentioned in Far Cry 5 via a letter left by the cult.

Alex, Sara and Hannah go vlogging on a trip to Hope County, Montana to help their friend Mark. Alex is told by Mark that the town is being controlled by the group Project at Eden's Gate and people have gone missing since, including Mark’s sister Linny. The group then head to the Spread Eagle Bar to meet Mark.

At the bar, Mark talks about Linny, saying she left on her own, spending lots of time with John Seed. He tells them about the Seed Family, who lead the "Peggies". The group head to Joseph Seed's sermon at the Teller Ranch to get a closer look at Eden’s Gate. After the sermon, Mark tries to get Linny out of there, but the group hold him back. They decide to investigate further, finding Eden’s Gate members drowning Linny in a lake filled with a mind-control drug, making her compliant. Jacob Seed then captures the group from behind, taking Alex’s minicam and bringing them to the lake. The group is submitted to the lake and then imprisoned.

At a church, Faith Seed meets the group, and invites Sara to join her and Joseph. During the night, while Joseph writes in his journal, Sara begins asking questions. Joseph invites her to join Eden’s Gate while Faith pours her a cup of tea, adding the drug in it. Alex, Hannah and Mark break out of their imprisonment and decide to upload their footage on the minicam to alert the police and the world of Eden’s Gate. They head out and find weapons, including guns and a crossbow. Sara drinks the tea with the drug inside, drugged to comply with Eden’s Gate. It is possible that she joined the cult after Faith Seed gives her a cup of tea with a blue liquid in it, which may or may not be Bliss. 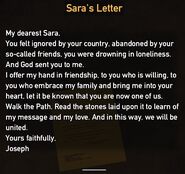 A letter written by Joseph Seed to Sara in Far Cry 5
Community content is available under CC-BY-SA unless otherwise noted.
Advertisement