Sayla is a gatherer of the Wenja tribe, and a primary character of Far Cry Primal.

Sayla suffers from the horrors she witnessed when her Wenja village was attacked by the vicious Udam and their bloodthirsty leader, Ull. After fleeing the slaughter, Sayla sought shelter far away in a small cave, but she was haunted by the screams of her dying Wenja tribespeople. She still hears the cries in her head, and she assumes everyone is haunted by the very same screams. As a skilled gatherer, she longs for the comfort and security of a Wenja village. She knows that Wenja have strength in numbers. It's the only way to combat the Udam.

She has a visceral hatred for all Udam. She soon discovers that slicing ears from dead Udam is a way to quiet the screams, if only temporarily. For Sayla, the Udam ears absorb the screams. But in her heart, she believes the only way to silence the Wenja screams permanently is to kill the Udam leader, Ull. When she meets Takkar, Sayla sees a Wenja brother who could help her reunite the Wenja and defeat Ull.

Sayla is an experienced gatherer and healer, since she knows which herbs and resources are needed for certain sicknesses or injuries.

Sayla has some skills in combat, as she is able to use a spear and a dagger to survive the Udam's attack on her village. 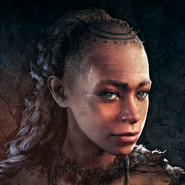 Concept art
Add a photo to this gallery
Retrieved from "https://farcry.fandom.com/wiki/Sayla?oldid=99595"
Community content is available under CC-BY-SA unless otherwise noted.