“There are few creatures Rook Island natives despise more than snakes. They are considered unclean and eating them is taboo. Rook Island snake venom was used by the CIA in the 1950s to extract secrets from Russian scientists and also as a good alternative to vermouth in martinis.”
Survival Guide


They can usually be found lying coiled in various areas such as at the bottom of Radio Towers, among the trees or inside huts, houses and temple. Their presence is revealed by angry hissing, but they are often difficult to locate. When the player comes too close, the snakes will lunge and bite, taking a small amount of health.

“Admit it. If you lived somewhere where poisonous snakes lurked in the underbrush, you’d want to know they were there long before they bit you. So one scientist had the bright idea of turning nanobots loose to hunt after snakes and paint them in bright neon colours. Sure, it’s graffiti on an unparalleled scale, but this is one act of vandalism everyone can appreciate.”
Data Console


Appears as the Neon Snake in Far Cry 3: Blood Dragon. It appears in various places and can be difficult to spot in grass despite of its bright colour. It is the Blood Dragon equivalent of the standard snakes seen in Far Cry 3.

Known as the Pit Viper in Far Cry 4, they can be found around in various places around Kyrat. Their skin is green with a yellow underbelly. Like other snakes in the Far Cry series they hiss when you are near by and will strike if you get too close then slither off.

Pit Vipers are stealthy, as well as dangerous animals. Even though they are rather easy to kill, their bite contains venom that will drain your health. Where there is one, there are likely others, so move slowly and listen for hissing to avoid them. Pit vipers are usually found in mountains or a below a mountain. They can be found near the House of Chiffon or southeast of Banapur on a mountain.

Snakes are found all over Oros, appearing red with dark strips along its body. Their bite can cause poisoning.

Snakes can be found throughout Hope County. Their presence is revealed by angry hissing and a rattling sound, but they are often difficult to locate, neither the Binoculars, nor Boomer's ability will reveal them. The bite causes a minor poisoning effect, that does a damage over time effect. The effect can be negated immediately by using a Medkit, or waiting it out.

In New Dawn, snake appears the same way as they do previously, but unlike the other Far Cry games, you can loot the snakes now. They can be recognised by their hissing noise and red skin.

Snakes in the wildlife guide of Far Cry 3 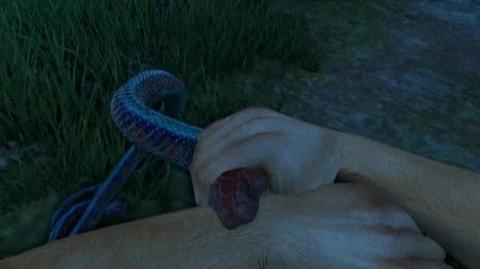 A Pit Viper in the wild of Far Cry 4

A 'Neon Snake' attacking Rex in Far Cry 3: Blood Dragon
Add a photo to this gallery

Retrieved from "https://farcry.fandom.com/wiki/Snake?oldid=95133"
Community content is available under CC-BY-SA unless otherwise noted.