Julian Bailey[1]
"They made me strong. Now they are weak. And the weak must be culled."

Pratt is sent with The Junior Deputy, Deputy Joey Hudson, Sheriff Earl Whitehorse, and U.S. Marshal Cameron Burke in taking Joseph Seed, a radical preacher into custody. Though Joseph appears to go willingly when they make the arrest, the situation quickly escalates when the cult responds to the arrest with violence. In the ensuing chaos, he gets lost, while Joseph launches a manhunt to capture the Marshal and the Junior Deputy.

The World Is Weak

Main Article: The World Is Weak

After his capture, Pratt is taken into the northern section of the county, the Whitetail Mountains. He is forced to read a confessional that is aired on several televisions in the Whitetail Mountain regions. He is later revealed to have been broken and conditioned by Jacob Seed and is reunited with the Junior Deputy when the latter is captured by Jacob. When he meets the Deputy again, he frantically says that the Deputy shouldn't have come.

We Must Be Strong

Main Article: We Must Be Strong

The second time Jacob abducts the Deputy, Pratt says "They want you to be strong. One of you will be strong..." before Jacob pushes him aside, calling him "peaches". He then listens to Joseph's story about his wife and daughter.

In the third scene with Jacob, while he talks to the Deputy about his own past, he forces Pratt to trim and style Jacob's beard. After this, Pratt helps the Deputy escape from Jacob's compound. The goal is to leave together, but when Jacob's mind controlling tunes start to play, Pratt screams in pain and shoves the Deputy on top of a semi-truck about to leave the compound, so that the Deputy is not affected.

When Jacob meets the Deputy again, he remarks that Pratt was "disciplined" severely for helping the Deputy escape. What precisely happened isn't revealed, but TVs around the region show Pratt tied to a chair in Jacob’s bunker, where he declares Pratt will be left alone without food and water to die. When the Deputy finds Pratt in the compound after Jacob is killed he is badly injured.

The Deputy goes to Jacob's bunker and rescues Pratt. Pratt, traumatized from his torture, begins smashing the machines looping his torture. Pratt then grabs a nearby gun and states that his torture made him strong. The cultists are now the weak ones, and, repeating what Jacob has said, "the weak must be culled", before shooting at the generators behind him and initiating the bunker's destruction. As they escape, Pratt tells the Deputy that the bunker they are in is supposed to protect them from what's to come, and believes Joseph's statement that the Deputy - and only the Deputy - can stop it.

At the end of the game, if the "Walk Away" ending is chosen, Pratt will be delighted not to fight Joseph and doesn't want to return if the Sheriff brings in the Guard from Missoula, only for the Sheriff to remark that Pratt will follow orders. If the "Resist" ending is chosen, Pratt can be heard frantically screaming the "Hail Mary" Catholic prayer while the bombs are going off.

In this timeline, the "Resist" ending is canon and Pratt is deceased. (However, as Far Cry 6 supposedly takes place in 2021, and the game does not seem to refer to any apocalyptic nuclear conflict, the canon status of Far Cry New Dawn is questionable.)

Deputy Pratt, waiting brokenly behind Jacob Seed while he boasts the to the deputy.

"They made me strong. Now they are weak. And the weak must be culled!" 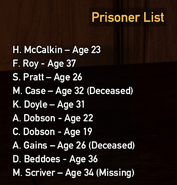