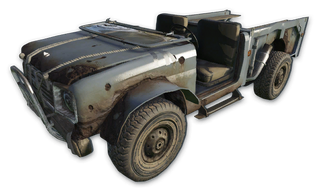 “The technical is an improvised fighting vehicle. That's just a fancy term for 'pickup truck with a machinegun mounted on it', or, as I like to call it, a Texan Parade Float. All the technicals on Rook Island belong to Vaas' pirates. They offer plenty of firepower, but no real armor protection.”
Survival Guide


The Technical is a simple but useful vehicle in Far Cry 3, used for carrying between 1 and 6 people; most are seen carrying about 2–3 people.

Technicals are used by the Pirates, Privateers and the Rakyat. It is pretty durable considering the amount of damage it takes to completely destroy it, but if you get the Evasive Driving skill in the Shark section of the Tatau, your "commandeered" vehicles will take half the amount of damage as they usually would.

Note that these vehicles do not give you much protection against incoming gunfire, as they have no doors, wind shield or roof. Overall the speed for the Technical is about average and will get you where you need to go in a hurry, but there are more reliable choices you could make in ground vehicles, such as the Scavenger.

There is a variant with a mounted gun and one without. It comes in different colours, including white, black, grey, yellow, blue, red, orange, green, and sometimes camo.

Retrieved from "https://farcry.fandom.com/wiki/Technical?oldid=91317"
Community content is available under CC-BY-SA unless otherwise noted.