Tensay is the shaman of the Wenja tribe, and a primary character of Far Cry Primal.

Tensay is the eccentric yet charming Wenja shaman. He chews mind-altering plants, communicates with the spirits of nature, and hold audiences rapt with his colorful stories and animated personality. As the Wenja's only shaman, he is the keeper of the tribe's beliefs. When not lost in a hallucinatory spirit vision, he devotes his attention to healing the wounded, aiding births, and conducting funeral rites for fallen Wenja.

A year ago Tensay was captured and enslaved by the fire-wielding Izila tribe. They scorched his flesh with the fiery mark of a slave and forced him to erect their megalithic standing stones. After suffering months of back breaking work, Tensay finally escaped and wrapped himself in a wolf skin to hide in the wilderness. Traumatized and half-crazed, he set out to call upon a spirit strong enough to gather the scattered Wenja tribe and unite them against his former captors.

Tensay is a prolific shaman who is highly capable in the arts of medicine, communicating with spirits, and conducting funerals. 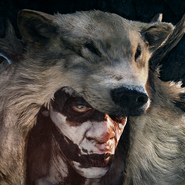 Add a photo to this gallery
Retrieved from "https://farcry.fandom.com/wiki/Tensay?oldid=99017"
Community content is available under CC-BY-SA unless otherwise noted.