watch 04:21
Wiki Targeted (Games)
Do you like this video?
Play Sound

The Jackal is an arms dealer who supports both the APR and the UFLL, and plays a major role in the events of Far Cry 2. While initially adversarial to the player, as the plot progresses, it is revealed that he is more of a nuanced character than an outright antagonist.

The Jackal is a notorious arms dealer, who has been selling his weapons to many countries in Africa for at least 16 wars: recently, to the warring factions the United Front for Liberation and Labour and the Alliance for Popular Resistance. Aside from the two warring factions, he is known to sell his weapons to many Gun shops scattered thoughout The Unnamed African Country. As it has been stated in the beginning of the game, every gun, bullet, and corpse is traced back to him.

He is wanted by the U.N. for breaking many arms laws, but has managed to avoid the authorities for many years now. The Jackal is known for selling his weapons at very low prices and being very good at hiding. Despite his apparent lack of morals, he is a man of humanist and nihilist beliefs, even quoting Frederich Nietzche's Beyond Good and Evil when the player first encounters him.

The Jackal served in the United States Navy during the Cold War, running smuggled arms to rebels across the world from South America all the way to Africa. Eventually, he found himself comfortable in Africa, selling weapons in the warzones, which has slowly justified his own actions.

At one time, he agreed to an interview with Reuben Oluwagembi. The interview was recorded on tapes, which were taken by the APR and the UFLL to cover up atrocities they committed. These tapes were somehow scattered by the mercenaries and ended up all over the country. Each tape features the Jackal's views on a particular subject, revealing his values, his experiences and his justifications for what he does.

According to a rumor discussed by Prosper Quassi and Walton Purefoy, the Jackal has brain cancer and only has 3 months left to live. While it could be said it's nothing more than a wild tale, anything is possible in a war-torn nation (as they mention their disbelief on hearing some guy was hired to kill him). This could possibly explain his sometimes strange and unpredictable behavior towards the player.

It's worth mentioning that the Jackal appears to be one step ahead of everyone, as he somehow knew the player's arrival in Pala on his first day, why the UFLL and the APR teamed up, and knew where to steal the diamond case.

At the beginning of the game, when the player arrives in Pala and blacks out due to the severity of malaria, the Jackal appears to the sicken player. He examines the paper given to his assassin and mocks him that he's too sick and has failed his mission, and that he knows that he is effectively "fired". He points out that since he the player is out of the job, and only works for money, he is no longer the Jackal's problem. The Jackal then declares that nobody can kill him and jams his machete into the wall, just a few inches above the player's head, to reinforce the point. Most likely believing that the player will not survive for long, he leaves behind his Star .45.

After the player is betrayed by one of the factions and seeks shelter from a sandstorm, the Jackal reappears and saves him. He is fairly surprised that he is still alive and gains a little respect from him. He then talks to the player before leaving.

After the APR and the UFLL agree to a peace treaty, the player is sent to retrieve a case full of diamonds to fulfill that goal. However, the Jackal is also aware of this and ruthlessly kills everyone at the designated area. When the player tries to retrieve the case, the Jackal holds him at knife point but allows him to live. However, he knocks him out for the player to be imprisoned and take all the blame of the aftermath.

Soon, when Reuben informs the player to go back to the prison, the Jackal is there, waiting. He claims that his views have changed and orders him some final mission objectives, retrieve the diamond case that was stolen by the Arms Dealer and kill the remaining leaders of the factions.

After both tasks are completed, the player meets the Jackal in his hut in a last meeting. As he prepares to burn down his home, the Jackal gives him the choice of either blowing up a mountain to protect the fleeing refugees (but will die from the resulting explosion) or take the diamonds to bribe the border guards and shoot himself in the head (the gun to be used for the job being in the suitcase, which the Jackal notes will never jam). In either scenario, the Jackal will presumably do the task that the player does not undergo and perishes as well.

a. Any member of several species of predatory or scavenging canids, especially in Africa (Canis aureus) long-sized, largely nocturnal and opportunistic, preferring to forage for carrion left by larger predators.
b. Slang. A person who performs immoral or debused acts in conjunction with an accompliance.
c. The alias of US-born arms dealer notorious for his illicit trade activities in central African seize zones during the late 20th and early 21th centuries. 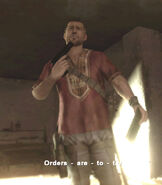 Retrieved from "https://farcry.fandom.com/wiki/The_Jackal?oldid=133155"
Community content is available under CC-BY-SA unless otherwise noted.