View source
watch 01:58
The Junior Deputy
Do you like this video?
Play Sound

"John was wrong. Your sin is not wrath. you would rather watch the world suffer and burn than swallow your pride." - Joseph Seed to The Junior Deputy

Customizable
The Junior Deputy, commonly known as Deputy, Rookie, "Dep" or "Rook", is the protagonist in Far Cry 5.

The Junior Deputy is the first player character in the Far Cry series who is fully customizable. They are a newly recruited, on-probation Sheriff's Deputy of the Hope County Sheriff's Department who is sent to help serve a federal arrest warrant in Hope County, Montana. Kim Rye notes that they are a skilled pilot who could even compete with Nick Rye, and they are skilled enough to use many weapons in the game.

The Deputy is sent with Marshal Burke, Sheriff Whitehorse, and fellow deputies Hudson and Pratt, to arrest Joseph Seed, a radical preacher who is the head of Eden's Gate. Though Joseph appears to go willingly when they make the arrest, the situation quickly escalates when the cult responds to the arrest with violence and crashes the group's helicopter.

In the ensuing chaos, Deputy Hudson is captured, Deputy Pratt and Sheriff Whitehorse disappear, but Marshal Burke and the Deputy manage to escape the standoff, with Joseph calling for a manhunt to locate them. Following a botched escape attempt to leave the county on road, Marshal Burke is also captured by the cult, while the Deputy is taken away by Dutch, who promptly cuffs them to a bedpost until he decides whether or not to turn them over to the cult. He eventually decides to trust the Deputy, so he supplies them a new set of clothes in order to blend in better among the locals, and asks their assistance to liberate his island, thus providing the tutorial missions for the game.

Once the Deputy liberates Dutch's island, they are swept into an armed conflict between the Eden's Gate cult and the rest of the Hope County residents. These include Pastor Jerome Jeffries, a Gulf War veteran and local church leader who has seen his congregation taken by Eden's Gate; Mary May Fairgrave, a bartender whose father was driven to suicide by the cult; and Nick Rye, a pilot who aims to eliminate the influence of the cult in order to build a better future for his children. The Deputy must use their help, among others, to build a local resistance to put an end to Eden's Gate.

After defeating John Seed, Jacob Seed and Faith Seed, and going back to where it all began, the Deputy raids Joseph’s compound with the members of the Resistance, but Bliss is used to control the Resistance members, who then turn on the Sheriff and his deputies, capturing Pratt, Whitehorse and Hudson. Joseph gives the Deputy a choice to either walk away, to save their friends or fight him.

If the Deputy chooses to Resist and fight Joseph, they must fight everyone in the compound to free them from the Bliss by downing and reviving them. After freeing everyone, Joseph attacks and causes a final confrontation in the battle. Following his defeat, Joseph will prophetically quote Luke 23:34, followed by Revelation 16:1, as nuclear bombs detonate in the distance and destroy Hope County.

With many either dying from the initial blast or being burned alive in the subsequent blazing hellscape that was once Hope County, the Deputy, Whitehorse, Pratt, Hudson, and Joseph cram into a pickup truck and make a Hail Mary dash for Dutch's nearby fallout bunker. Almost at their destination, a distressed Pratt leaps into the passenger seat where Whitehorse is sitting, all while repeating "we're not gonna make it," which distracts the Deputy and causes them to crash into a collapsing tree, killing Whitehorse, Hudson, Pratt, and incapacitating themselves. The semi-lucid Deputy is unable to stop Joseph from carrying them into Dutch's bunker, in a scene that mirrors how Dutch carried them into his bunker at the very beginning of the game. Upon coming to, the Deputy awakens chained to the very bed they were at the start - by Joseph, who reveals he broke in and killed Dutch. Joseph forgives the Deputy for what they had done and shows 'mercy', saying that he can't kill them as they're the only person that Joseph has left. He welcomes the Deputy to his family as his child.

If the Deputy chooses to Walk Away, Joseph will forgive them and their friends. Joseph, being a man of his word, frees Pratt, Whitehorse and Hudson and lets them go at the cost of the Resistance now being under his control. However, shooting is heard as Sheriff's Department leave the compound, leaving fate of the Resistance unknown. The Sheriff says he isn't going to abandon them and vows that they will come back with the National Guard to free Hope County by force. The Sheriff turns on the radio for the long trip, however "Only You" begins to play, which triggers the classical conditioning Jacob trained the Deputy with. They suddenly turn around, and the fate of everyone in the car - including the Deputy - is left unknown, however it can be assumed the Deputy killed or attempted to kill everyone in the car. When combined with the "Resist" ending, there is no way for the player to actually win.

In Far Cry New Dawn, it is stated that the Junior Deputy has become a new character known as The Judge. It is revealed through notes found in the game that whilst spending time in the bunker with Joseph, they started to believe in him and began wanting to "cleanse" themselves of sin. The Judge is referred to by several characters, such as Pastor Jerome, Hurk and Carmina Rye as "Deputy" or other terms. Hurk comments on the character as "still the silent type." 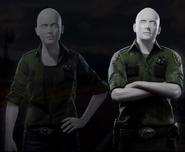