The DLC begins with Dani Rojas getting a call from Juan Cortez. Juan explains that he sent a group of Guerillas to grab a shipment of C4 but they went dark and he also mentions that he picked up Russian radio transmissions. He suspects that Yara's old allies have come back to mess with Libertad's operations. He sends Dani to go and investigate what is going on over there. When Dani gets to the village, its raining and everything is flooded. Dani hears a Russian voice coming from inside a house and as they step inside, they see a dead guerilla. Around the corner, they see an old TV playing static, a woman is speaking in Russian until Dani touches the TV. Now, Dani can understand the woman who is speaking telepathically with them. Her name is Shest' and she tells Dani to go to a nearby Bunker.

Once you enter the Bunker, you find Chorizo licking a sausage right next to a dead Russian soldier. As Dani investigates the dead soldier, Chorizo starts to look down the hallway and growl. The Demogorgon known as "El Devorador" is crawling above them and attacks Dani, knocking them out. Dani struggles to gain consciousness as Russian soldiers take all of their gear and get attack by El Devorador. Once Dani does fully gain consciousness, they only find Chorizo's dog collar.

As Dani tries to figure out what is going on, Shest' tells Dani to go into a room full of TV screens. Once there, Shest' briefs Dani on what she wants them to do. She wants Dani to help her destroy the gate room to prevent travel between our world and the other dimension, known as the "Shadow Place", so no more creatures can come through and kill more people. Dani states that they must find Chorizo first and that means they might have to enter the "Shadow Place" in order to save the little dachshund.

Shest' beams a crate into the room that contains a machete and a silenced pistol that is low on ammo. Dani then explores the bunker and eliminates any Russian soldiers inside. Eventually, they reach a control room and activate the machine that opens the door into the "Shadow Place". After Dani enters the "Shadow Place" they explore the dark reflection of the bunker and fight a few Russian Flame Troopers. After that Dani finds a woman who is crying behind the containment door. Dani opens the door while asking what is wrong but the woman turns around and attacks Dani. Shest' explains that the person is now a Kukly, which she describes as a puppet controlled by invisible strings. Right after Shest' explains that Kukly are strong but their weakness is fire, Dani then finds a shotgun that fires incendiary rounds.

Dani exits the bunker and sees a giant spider monster that is known as the Chernobog. Shest' explains that the Chernobog makes the Kukly. Dani then checks the nearby area for Chorizo but finds a lot of Kukly and his wheel. The next place Dani checks has more Kukly and a new gun called the Comrade. Dani finds one of the wrench's that Chorizo was carrying in an empty pool. Shest' tells Dani to go look in the nearby caves and talks about how she has lived in the bunker her entire life.

When Dani enters the cave, they find a dead Russian wrapped up in the slimy web stuff that is all over the place. Then Dani finds Chorizo's seemingly lifeless body stuck in the wall and she starts to freak out. Dani pulls him from the wall and starts to get really emotional and quite. Then Chorizo wakes up and licks Dani's face which gives Dani a big relief. Dani puts the wheel back on Chorizo's wheelchair and Shest' teleports him to safety. Then Dani is spotted by El Devorador and a ton of Kukly start to surround Dani. Shest' tells Dani to run back to the bunker because defeating El Devorador is impossible. When Dani got back to the Bunker, the door was locked so they had to defend themselves against waves pf Kukly. Once Shest' got the door opened, Dani was about to travel back to the normal world. Dani sees that Shest' has placed C4, that she stole from Juan, all over the gate room. El Devorador then comes through the door and tries to attack Dani but Shest' stops it in the air with her mind. Shest' tells Dani to blow up the C4 and Dani pushes the button. As the C4 blows up, Shest' teleports Dani to a bar in La Triada Mural.

While celebrating in the bar, Chorizo comes up to Dani. Dani happily grabs a old tennis ball that was sitting next to some old drunk guy with a mohawk that is passed out at the bar. Dani throws the ball off into the distance and tells Chorizo to go fetch it. Then the lights start to flicker in the bar and Dani starts to get pretty worried that Shest' failed to stop El Devorador. But in reality, it was just the lights being crappy and old. 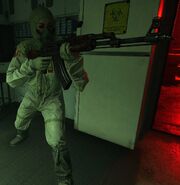 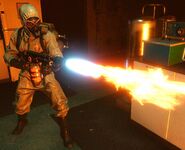 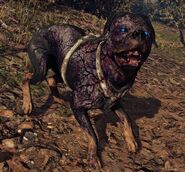 The laser opening a gate to the Mirror dimension.

Dani Rojas running away from El Devorador ( He is smiling for some reason. Why? Nobody knows.).