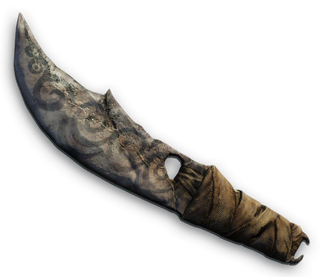 "This knife was said to bear immense power and has been revered since its discovery here on the island. It also works quite well as a mango peeler."

The Tribal Knife is a melee weapon available in Far Cry 3.

It is one of the three melee weapons available in the game, the other two are the Machete and the Japanese Tanto.

It is unlocked by pre-ordering the game, or by purchasing the compilation DLC. It can be equipped at a shop in the "melee" section, and does not take a weapon slot, but will replace any other melee weapon you have currently equipped.