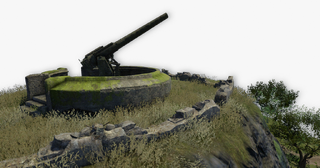 "This fort held the last garrison of Japanese troops on Rook Island during World War II. After hearing about Iwo Jima, the soldiers stationed there intended to make a similar stand against any impending Allied attack. The attack never came. When orders to surrender reached them, every soldier on the hill committed seppuku."

Turtle Hill is the ruin of a Japanese bunker and gun emplacement coastal defence position dating back to the Second World War when the Japanese occupied the island. The artillery gun remains in its mounting looking out to sea but the bunker that would have housed a machine gun nest has long since fallen into ruins and is now solely inhabited by the dead bodies of Imperial soldiers.

The stonework is green with moss and has crumbled in many places as a result of the defensive position being left to decay. The Survival Guide states that every soldier stationed at the coastal position committed seppuku upon hearing the Japanese surrender order meaning that the remains of these soldier are likely scattered around the area under the soil.