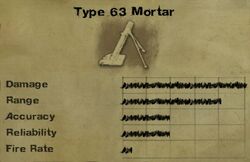 The Type 63 Mortar is available after completing the second convoy mission in Act 2 and can be purchased for 20 diamonds. Enemies wield this weapon in Act 2.

The Type 63 Mortar is a 60mm mortar made in China. It is basically an updated version of the older Type 31 mortar. It is smaller and lighter than the Type 31. It is used to provide close-in support of ground troops.

Although the Type 63 Mortar has a minimum range, it can be used at long range to great effect. It can be used to deliver artillery fire on an enemy position, either softening them up or getting them to scurry around. The mortar fires both smoke and explosive rounds. You use the smoke rounds to adjust your shots for your explosive rounds, although the yellow smoke created by the mortar shells will alert enemies, causing them to scatter. You may, therefore, want to practice firing the explosive round only to hit the first time.

This weapon is meant to be a long-range, anti-personnel weapon, much like a sniper rifle. In fact, the mortar has been called "the explosive sniper", for its ability to deliver explosions over a long range. Its ammo total will be equal (and upgraded in the same way) to any rocket launcher. Due to its unique trajectory and large explosion radius, the Mortar can be used very effectively to take out outposts or other heavily guarded areas from a distance — even if there are obstacles in the way. It does, however, take a bit of getting used to.

Usually, if the player is fast enough, AI controlled mercenaries who fire this weapon are unlikely to hit the player. However, when guarding the barge at the beginning of Act II, the mortar soon proves to be a very deadly weapon as it can cripple the slow moving boat in one hit.

After ~15 shots the Mortar may occasionally misfire, dropping the mortar bomb a dangerously short distance away from the player.

This is a quick and basic how-to guide on using the Type 63 Mortar. A close-up location map is required for this method.

With the map in hand, use the Monocular to scout and tag notable landmarks such as mounted weapons, supply dumps, and vehicles in the area to use as reference points for placing your mortar shots. It is preferable for you to have a visual of the target, so having an elevated position is recommended. If it is not possible, use the tagged landmarks and surrounding structures to approximate the distance between you and the target.

A good rule of thumb for close-range mortaring is to use the green-marker-equals-one-notch-on-the-mortar-sight rule. The length of the green marker (that represents your position on the map) is approximately the distance that one notch on the mortar sight would hit. Thus, by counting the number of green markers you can fit in between you and the target, it can be used to determine how many notches are needed for you to hit your target.

With all of that in mind, find a suitable location to use your mortar. Make sure you have a clear line of fire (i.e. clear of trees and other obstructions). Turn and face your target so that the green marker is pointing in the correct direction. Count how many green markers (excluding your current one) it would take for you to reach your target. Use the number of green markers to set the number of notches needed on the sight. Use the appropriate shell type and fire away.

Just as rifles are not alike, the 80-meters-equals-your-green-marker-and-one-notch-on-the-mortar-sight method may or may not be accurate for you. The following steps will aid in accurately reading the range markers.

One way to become accurate with the mortar is to copy real-life snipers. Since it is impossible to make two rifles absolutely identical, they have to gather 'dope' on each rifle — how distance, wind, temperature, humidity, elevation etc. affect that particular rifle, and use that information to hit their target. For extreme distance shots, this information is critical. Find a large level spot with a landmark that shows up on the map. Use a building or other landmark for a marker and put a vehicle in front of it for a visual target, and use either the notches or points on the sight for reference. Put the sight on the first reference and adjust distance from the target until you score a hit. A switching to the monocle or a sniper rifle will let you easily see where the mortar lands.

Mark a starting point on the edge of a piece of paper, hold it carefully up to your screen, and place that mark in the very centre of your green marker, and then gently put a little line where the target (building) is. LCDs can be fragile, so be very gentle, using a non-permanent felt tip pen instead of a pen or pencil. You can darken the lines later. The map moves as your avatar breathes, so pick the up or down position and use it consistently. Keep doing this for all points or notches.

While the Mortar usually excels only in eliminating outposts and stationary targets, it is possible to use it against convoys. However, this requires extreme luck and training. A demonstration of this can be seen here.