Warchief of the Udam

Attack of the Udam

Ull is the leader of the Udam. Being their warchief, he leads them in battle and rouses his tribe in their efforts to fight off their disease and find greener pastures, wishing to live in the lush valleys of southern Oros instead of their cold and bleak Northern Arctic Tundra. He is one of the two main antagonists of Far Cry Primal.

Ull is the leader of the Udam, and he commands their respect and fear. He is a brute with limbs of timber and bone on his body to make him appear more intimidating. Severe fire burns cover parts of his body, with his nose and ears have melted away leaving him with a mottled mask for much of his face. These bright-red scars came from the deadly fire arrows of the Izila tribe.

Ull fights for a better future for the Udam. They suffer constant sickness, and many Udam die young from their generations of inbreeding while others are at risk of a slow agonizing death to the "skull fires" (a type of brain disease) that plague them. During the harsh Ice Age, the Udam resorted to cannibalism for survival, which lends to their now-bleak predicament. Ull himself suffers from constant headaches and trembles from skull fire, his diet consisting of Wenja and Izila captives.

The survival of his people is foremost in his mind as he marches through Oros, desperately fighting for more plentiful lands and to earn his people a chance to recover from their hard years deep in the frozen mountains.

Before the Udam arrived in Oros they lived in the mountains way far north where there was competition for food from predators such as the cave bear and Sabre tooth. With such fierce competition for food the Udam resorted to cannibalism and killed other tribes for food. UII was the greatest warrior in his tribe and proved his strength by killing a cave bear with only a hand club. Ull had a mate who was suffering from the "skull fire" and ever since she died Ull was determined to find a safer home for his tribe and family.

At some point after the Udam arrive to Oros, Ull takes control over the Udam and begins to terrorize both his own tribe and the Wenja. Ull takes on many challengers and defeats them, with the exception of Dah. With the birth of his daughter and son, Ull begins to desperately look for a cure for the "skull fire" that weakens the Udam, and he concluded that the defeat of the other tribes would be a way to get the cure. He manages to defeat the Wenja tribe, scattering them across Oros and soon begins to prepare for more fighting with the Izila, being scarred in the process.

When the Wenja begin to rebuild their numbers, the Udam attempt to scatter them again, led by Ull himself. There, he meets Takkar personally, and threatens the Wenja with their destruction, and proceeds to attack, only to suffer a defeat. However, Takkar managed to repel by destroying the bone trees that I informed Sayla, but nevertheless, many Wenja were massacred by the Udam. When Takkar visits the region, he is captured and threatened once more by Ull, saying that by eating him (Takkar), he will be stronger, but soon Takkar escapes.

Takkar soon begins an assault on the Udam caves, where he mortally wounds Ull. Before Takkar could finish the Udam War-chief, he heard his son crying off in the distance and ordered that Takkar stay his hand. As he made his way over toward his child, he grabbed the infant and remarked that if he dies, he is taking the Udam child with him. Before he could stab and kill the child, his daughter appeared from behind, gasping as UII was about to execute her brother. Feeling a sign of remorse, he stayed his hand and ordered that Takkar protect his newborn child and daughter. UII then passed on as Takkar honored his final wish.

Ull is an extremely strong and dangerous warrior, as he is physically able to lift Takkar and kill multiple Wenja. He is also shown to be deadly with weapons as seen when he threw a rock shard at one of his captives and killed him without even looking.

Not much is known about Ull except that he is incredibly strong, cannibalistic, diabolical, violent, psychopathic, evil, sadistic, ferocious, megalomaniacal and murderous. It is later revealed that he seeks to claim Oros for his tribe in order to fight off the "skull fire" that they suffer from, making him desperate. He also turns out to be the father of two children, and he cares for them as much as he cares for his entire tribe. He was the Udams greatest warrior and his strength and cunning has served him well with his war against the Wenja and the Izila. Despite his ruthless tactics and villainous behavior, he spares his newborn child and orders that Takkar take care of him, before dying. 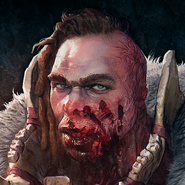 Add a photo to this gallery
Retrieved from "https://farcry.fandom.com/wiki/Ull?oldid=99599"
Community content is available under CC-BY-SA unless otherwise noted.