Urki is a thinker of the Wenja tribe, and a secondary character of Far Cry Primal.

Urki is the ancient ancestor of Hurk who appeared in Far Cry 3, Far Cry 4, Far Cry 5, and Far Cry New Dawn. [1] He is a simple Wenja who always tries to make his life easier. He's continually working on new ideas. Fortunately, his caveman brain is much slower than your average primitive man and his good ideas fall flat from terrible execution. Thankfully, he won't be long for this Mesolithic world. He has many absurd ideas, such as flying by using bird feathers and using poorly spaced rocks as armor.

Takkar met Urki when he was exploring the southern regions of Oros, and Urki was trying to fly like a bird. Takkar explained to Urki that he does not have feathers, and this prompted Urki to call Takkar "Smart Man", and ordered him to gather feathers from birds and a tortoise shell that will act as a protective helmet. When Takkar gave the ingredients to Urki, Urki attempted to fly like a bird from a landing platform by a cliff, though, unfortunately, he ended up falling into a pile of hay.

Takkar met Urki again when he killed an Udam, though Urki was thankfully stabbed in the side with a spear. Takkar told Urki that his skin is too soft unlike a rock, and this gave Urki the idea to create armor out of rocks. He sent Takkar to retrieve some special rocks in a nearby Izila camp. Upon Takkar's return, Urki used them to create the armor that will protect his chest and challenged Takkar to throw a spear at him. When Takkar did, Urki was injured but fortunately alive.

Takkar met Urki for the third time when Urki said that bears often attack him due to his smell. Takkar said that Urki needs a new scent, and this made Urki think of a new idea in creating a new scent out of honeycomb and Woolly Rhinoceros dung to scare bears off. Takkar gathered the ingredients and Urki rubbed himself with honeycomb and Woolly Rhinoceros dung, believing that his new scent will scare bears off. Urki then told Takkar to send his tamed bear to attack him to see if the scent works. It did not and Urki was wounded but he did not die.

Afterwards, Urki, fortunately, decided to move to the new Wenja village and stay there as a permanent resident, and since he is not exactly a specialist, he does not require Takkar to build a hut for him. 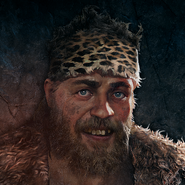 Similar with someone...
Add a photo to this gallery
Retrieved from "https://farcry.fandom.com/wiki/Urki?oldid=99737"
Community content is available under CC-BY-SA unless otherwise noted.