Valley of the Yetis takes place after the other Far Cry 4 DLC, Escape From Durgesh Prison. When Ajay was still in the north in the events of this DLC, he overheard one of the guards of Yuma saying that she was sent to a valley in the northern mountains of Kyrat on an expedition after something of great power called "The Relic", so when he left the North, Ajay contacted Sabal and Amita saying that he was heading to the valley to learn what is behind the expedition and the Relic.

Upon selecting the "Valley of the Yetis" in Chronicle Mode of the Main Menu, the sounds of a helicopter explosion can be heard, followed by the screams of a horrified pilot, Sukhwinder, yelling that he is bailing out of the helicopter. Shortly after, Ajay Ghale slowly awakens to the sounds of what presumably is an interrogation between Sukhwinder and an unknown individual. Sukhwinder stated that the Golden Path heard that the Royal Guard under the orders of Yuma Lau was seeking a powerful "Relic" from one of Pagan Min's men, and thus the Golden Path sent Sukhwinder and Ajay to retrieve the Relic in the valley before Yuma's expedition did. Promptly after the interrogation, Ajay decides to locate the pilot. However, part way through the search, he enters a shrine of sorts, and notices a pair of individuals that don't seem to be part of Yuma's soldiers. After killing the lot, he continues the search and eventually runs into a relay station. After getting spotted by more of the unknown soldiers, a fight commences for control of the station where Ajay is ultimately victorious. Upon entering the Relay Station, he notices a radio and manages to contact help.

After hearing about a coming storm, he stays put where he eventually hears another conversation on the radio. It refers to him as an "interloper" and another individual is heard saying that he must be killed before the start of a "ritual." Deciding to prepare for an all out assault, Ajay is able to successfully defend the relay station from the Disciples attackers.

The next morning, Ajay will receive a transmission from an ind

ividual, dubbed "Sandesh", claiming that he has taken Sukhwinder captive, and is preparing to kill him. When Ajay asks why he has decided to kill the pilot, Sandesh states that he wants to see Ajay, and judge him to see if he is fit for the eyes of "Yalung", but if he doesn't come, Sukhwinder will die. Ajay then heads over to another shrine, where he is attacked by more soldiers. Upon killing all of them, Ajay runs over to Sukhwinder to free him, only to be knocked out by Master Sandesh, saying that he will meet "Yalung", and will be judged.

Sometime later, Ajay awakens, and hears someone yelling (presumably Sukhwinder), and sees a larger figure snap the individual's neck, before the larger creature yells and runs off. Ajay then realizes he has lost all of his equipment, except his flashlight. While exploring the cave, Ajay prepares to climb a ledge, only to see a Yeti eating, to which the Yeti stares at him, and it runs off. Continuing his search, he comes across a grappling device, and proceeds to escape the cave. During his return to the relay station, Ajay also manages to retrieve his equipment from a camp, to which he manages to secure. Later on, Ajay then defends the relay station again from Sandesh's soldiers.

The next morning, Ajay will then receive another transmission from Sandesh, claiming that he has the honor of being fed to a Yeti. Master Sandesh then says he knew why Ajay came for the relic, and then says he cannot contact for help, as the signals are jammed, except for the channel he is on. Upon exiting the relay station, he hears a conversation between two soldiers, telling each other that a radio maintenance crew crashed their truck, to which the latter soldier saying that the other soldier should send another soldier out to check the radio jammers to see if they haven't frozen up. Ajay then decides to head to the crash site, and realizes that he has to disable the generators for the radio jammers, disabling two.

However, Ajay manages to obtain a wingsuit, and soared down to a small shrine, to which he encounters another Yeti. Upon killing the Yeti, orange mist starts to arise from the Yeti's body, only for it to vanish.

After destroying the last generator, Ajay returns to the Relay Station via the Disciples truck, and prepares for another assault, as before. The next morning, Ajay attempts to call for help, though he doesn't receive any broadcast. However, Ajay hears two of the soldiers talking about some captive caught making explosives, and this unknown individual being drugged with an elixir and is planned to be sacrificed as an offering with other unknown captives. Ajay then ambushes a convoy, and then heads over to the prison to find the bomb maker, while trying not to trigger the alarm. Having killed a few of the prison guards, Ajay finds the bomb maker, named Digvijay, and manages to escort him out of the prison, all the while killing guards.

Returning to the relay station, Ajay has to face off against Sandesh's guards, who are now armed with explosives. Upon surviving another night, Ajay will hear Digvijay on the radio, claiming that he "cannot completely thank him for saving his life." Digvijay then tells Ajay that he has left homemade explosives at random coordinates, but, also tells him about the "Relic", and how the elixir "changes" human flesh and thus must be destroyed. Ajay then set forth to oblige Digvijay's request and proceeds to assault Master Sandesh's fortress at the Temple of Yalung after recovering Digvijay's explosives. Ajay went on to kill Master Sandesh and his guards, find the location of the Relic, and also managed to destroy the Disciples' elixir supplies in the process. Having destroyed the elixir supplies, Ajay takes a Disciple's truck, and returns to the relay station, in which he defends the station for one last time.

Later on in the morning, Ajay finally manages to get in contact with Golden Path officials. However, when the officials ask Ajay about Yalung's Relic and if it is destroyed, Ajay tells them he's working on it. Ajay instructs the Golden Path rescue party to pick him up at the peak of Hajura'Amako Hatama (the largest mountain in the valley) after he deals with the Relic and leaves the relay station. However, Ajay realizes that he needs an oxygen mask to proceed to the peak. After killing a disciple, and looting his body for the oxygen mask, Ajay continues up to the peak, killing a Yeti partway. Upon finding the Relic, Ajay fires at it, only for him to black out momentarily.

Quickly having awakened, Ajay turns around to see that the Relic is creating m

ore Yetis to protect itself. Regardless, Ajay manages to destroy all the roots to the Relic, to which it explodes, knocking Ajay out. Later, Ajay struggles to get up, only to realize he has turned into a Yeti, and to his realization, screams, when a disembodied voice says: "Your path is with us, not against us. Awaken and walk beside us."

It is not fully clear what happened to Ajay after the cutscene, though it is widely believed that the relic caused hallucinations for Ajay, which tricked him into believing he had turned into a Yeti. It is claimed that Ajay was rescued from the Himalayas by helicopter, and brought to The Ghale Homestead. A cutscene follows, with either Amita or Sabal congratulating Ajay on escaping Durgesh. The campaign continues normally after this.

According to the expedition journals, some witnessed the Yetis drinking water from the hot springs which contain the orange substance from the glowing fungi. After analyzing the strange substance, men from the camp site began drinking the liquid and started feeling high and more powerful which made them become addicted to it. Side effects included screaming, hallucination, extreme aggression and inflammation around the faces and orange eyes. As a result, the men hid away in caves and began to mutate, which the disciples call "Awakening". Finally over an unknown period of time they evolved into Yetis.

According to notes of some Awakened soldiers in the valley, an alternative way to turn into a Yeti is to find The Elixir, then extract it into a liquid and drink it. 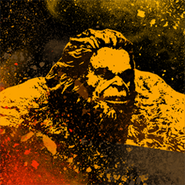 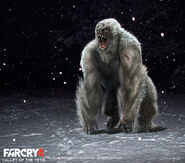 Valley of the Yetis Concept Art 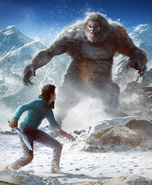 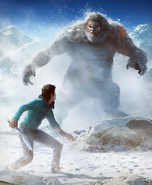 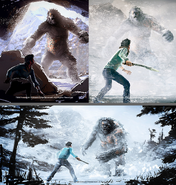 Retrieved from "https://farcry.fandom.com/wiki/Valley_of_the_Yetis_DLC?oldid=96150"
Community content is available under CC-BY-SA unless otherwise noted.