"The Vector .45 ACP is a more recent design that enables an extremely high rate of fire without all the troublesome recoil. It's accurate and handles well in close quarters combat."

"This sub machinegun stole the limelight in 2006. It sports a unique recoil system which makes it easy to control while laying on the trigger. Basically, that means you can throw lead downrange and it won’t be scattered all over the place like the dignity of an old man at a children's urinal."

In Far Cry 3, it can only be obtained from the shop since it's neither carried by the Rakyat, Privateers nor the Pirates. While the weapon is not available for purchase until the player reaches the Southern Island, its signature version can be unlocked while still on the North Island. The basic version is also briefly given to the player during one of the final missions on the North Island. It becomes free after activating 12 Radio Towers. Since there are just 11 Radio Towers in North Rook Island, it can only be unlocked after reaching South Rook Island, specifically, after completing the mission Fly South, which would also make it available for purchase at the shops.

In Far Cry 4, it can only be attained by progressing in the campaign.

In Far Cry 3, a signature version called the Shredder is available for purchase after the player finds 10 Memory Cards. It has a custom paint job, an Optical Sight, a Suppressor, an extended 50-round magazine, enhanced accuracy and damage, and costs $3275.

The Shredder is a very powerful weapon that can take down small groups of enemies with ease. The suppressor allows the Shredder to silently eliminate targets when playing with a stealthier approach, while the extended magazines allow the weapon to be used in large fire fights, as well. Combined with the fact that the weapon can kill lightly armored enemies in just a short burst of bullets, the Shredder is one of the best guns to equip, simply because of its versatility and sheer power. It should be noted, however, that when fighting Heavy Gunners you may want to choose a weapon with better burst damage, as prolonged gunfights with these enemies can often be lethal. The SPAS-12 is an excellent choice, as the high damage combined with the quick fire-rate can down a Heavy Gunner at close range fairly quickly when aiming for headshots. The AMR is also an extremely powerful weapon, being able to kill Heavy Gunners in just one shot, at the cost of a low fire-rate and awkward handling at close ranges.

The look of Vector .45 ACP could be customized with one of six available paint schemes. Each scheme costs $200 and does not affect weapon performance. 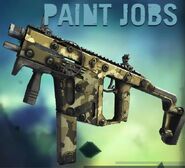 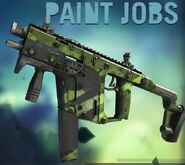 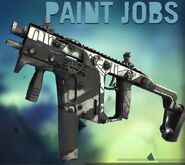 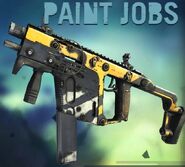 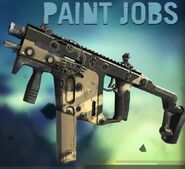 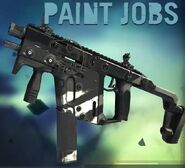 First-person view of the Vector.

Iron sights of the Vector.

First-person view of the Shredder.

The Vector returns in Far Cry 4. It can only be attained by progressing in the campaign. In the multiplayer, the Vector is the second sub-machine gun to be unlocked.

The Shredder returns as the signature version of the Vector, and is very similar to its Far Cry 3 counterpart. It is unlocked by reaching Karma level 6.

First-person view of the Vector.

The iron sights of the Vector.

First-person view of the Shredder.

Full view of The Shredder

The "Space Force" Vector .45 ACP is a rank 2 weapon. it is available as a Ubisoft Club membership reward. It is essentially a normal Vector .45 ACP with a blue, white, and black paint job.

"Think of this submachine gun as the hammerhead shark of guns."

The Optimized Vector .45 ACP is a rank 3 weapon. It appears to be in a state of mild damage, with one small part of its inner workings exposed. A piece of copper piping is screwed below the barrel to serve as an assist. There is duct tape on the grip of the gun itself, with a scope on top with rusty metal fixtures holding it in place. The stock appears to be completely broken, as in its place is the lower half of an iron; with an adjustable belt holding it in place to serve as an improvised replacement stock.