Virgil Minkler is the current mayor of Hope County. At first, he welcomed Joseph and his flock into his county, seeing them as benevolent due to their teachings and charity. However, Joseph's project has become more radical over time. His son became interested in the Project from his peers and ran away to join them. Shortly after, Virgil's wife left him for Joseph's teachings.

Several residents started to mysteriously vanish, and the Project was the first to blame. Virgil was notified with the arrest warrant for Joseph Seed, and reluctantly agreed he was responsible for the missing people.

Unfortunately, the arrest went haywire and Joseph announced judgement day was imminent. His followers began to raid and "save" anyone they find, whether they wanted to be saved or not. Hope County turned into an all-out warzone. Faith Seed and her followers transformed the Henbane River into the Project's Bliss production, leading to her beloved Angels running amok, killing anything in their sights. Virgil and Tracey Lader gathered as many survivors as they could find, including Sheriff Whitehorse, and secured the Hope County Jail.

Virgil is first heard on the map when listening to the radio broadcast at the Hope County Jail, a refuge for civilians and Resistance fighters hiding from the Project at Eden's Gate.

After defending the jail from the Peggies who are assaulting the prison, the Sheriff introduces you to the residents of the prison.

After raising the level of resistance in the Henbane River region, Faith Seed will strike back at the deputy, using her lingering influence over Marshal Burke to force him to murder Virgil, before turning his gun on himself.

After the Deputy rescues Tracey, they run to Virgil's room, only to find both Virgil and Cameron Burke dead. Tracey tries to revive Virgil, but in futility. Tracey tearfully mourns Virgil's death, and angrily tells the Deputy to kill Faith Seed.

Virgil being shot to death by US Marshal Burke. 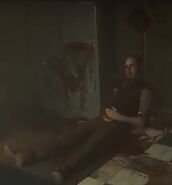 Virgil's grave
Add a photo to this gallery

Retrieved from "https://farcry.fandom.com/wiki/Virgil_Minkler?oldid=125666"
Community content is available under CC-BY-SA unless otherwise noted.