The Man in White

Alain Goulem
"This data is classified. You didn't think it would be that easy, did you?"

"Back in the late 80's, Willis Huntley was noted in his psychological array as a "focused" recruit. He's since participated in a series of CIA operations intended to steer the governments of Iran, Iraq and Somalia. Willis is confident, fearless, calculating and loyal, but recent events have scarred him. Rook Island has taken hold of him, and it won't let go."

Agent Willis Huntley is a CIA operative who provides Jason Brody with information about the Rook Islands and its inhabitants after he escaped the island. He returns in Far Cry 4 as a minor antagonist, and again in Far Cry 5 in a side mission.

Back in the late 80's, Willis Huntley was noted in his psychological array as a "focused" recruit. He's since participated in a series of CIA operations intended to steer the governments of Iran, Iraq, and Somalia. Willis is confident, fearless, calculating and loyal to the agency and to his country.

Fresh in from Task Force 141 in Russia, Willis is back in Kyrat for the first time in decades. Previously he was there to install operatives deep into Pagan Min's organization, a joint op between Langley and the DEA. Pagan was pumping way too much heroin into the streets of the US to go unnoticed. Now Willis is back in Kyrat and he needs someone who is willing to get their hands dirty, someone he can control via the knowledge he has of Kyrat’s recent past and a man named Mohan Ghale.[1]

At some point, a few years before 2012, Willis, Sam Becker, and a team of CIA operatives were ordered by the CIA to go to the Rook Islands in order to keep tabs on and eventually terminate notorious slave and drug trafficker Hoyt Volker.

In the North Island, Willis took up residence in a house in Badtown where he would gather intelligence about Volker and his psychotic right-hand man Vaas. Through unknown circumstances, however Willis lost contact with his crew when they were sent on a reconnaissance mission in the Southern Island which was "owned" by Volker.

Driven by a hallucination, Jason seeks out the "man in white" (Willis) to lead him to his kidnapped friends. Jason's search leads him to Badtown, where he discovers Willis at a bar, and tails the agent back to his home, seemingly undetected. Upon entering, however Jason finds the door locked behind him and Huntley demanding to know who he is before he kills Jason with concealed C4. Jason introduces himself much to Willis' interest and is sent through a concealed door down to Willis' lair to "trade favors."

Jason learns that Willis is from the CIA and that for some time he has been gathering information on Hoyt and his drug and slave trade operation. Willis gives Brody some information about Hoyt and reveals that Hoyt is Vaas' boss. Willis gives a Flamethrower to Jason and tells him to set fire to Hoyt's drug field and boat to bring the kingpin to the island.

The plan succeeds and Hoyt Volker is drawn to Beras Town where he begins executing its inhabitants. A man associated with Willis avoids imminent death and is rescued by Jason. The man then gives Jason a transportation manifest that Hoyt was searching for; information on where Oliver Carswell is being held. Later, Willis points Jason to Buck, a hitman in Hoyt's employ who bought Brody's kidnapped friend, Keith, from Hoyt, and has him in his possession.

Some time passes before Willis is heard from again. Jason contacts Willis to help him kill Hoyt. Willis says it cannot be done and adds that he plans to leave the Rook Islands and join Task Force 141 in Russia. As he departs Jason is offered a ride to Hoyt's Southern Island, if he reaches the plane in time. Jason arrives just in time to help Willis fend off some Pirates and give him time to repair the airplane.

As promised, Willis inserts Jason into his destination via high altitude and gives him a Wingsuit before leaving the Rook Islands, apparently for good.

"Beware of this foreign spy. He is personally responsible for inciting insurrection and strife wherever he goes. This Willis Huntley has traveled around the world and left behind nothing but a trail of death and tears. "

Willis appears again in Far Cry 4, with missions that must be played in order to advance the main campaign, this time he has a short antagonistic role.

Willis first contacted Ajay to request him for help on raiding the only airport in the country so that Willis can safely land, before taking out the commander and staving off a retaliation attack from Royal Army. As a 'payment', he gave Ajay a document consists of his parents' background, which Ajay then must get from a taking off plane. Later on, Ajay became disappointed and furious as he found the said document was heavily redacted.

Willis then ask Ajay to do some tasks for him, with revealing more of Ajay parents' background as 'payment'. These tasks consist of flying to the Himalayas and killing various lieutenants of Yuma's Royal Guard. Along the missions, he revealed some things about Ajay's parents, such as that he once worked with his father, and that his mother was a Tarun Matara.

On the last mission, it is later revealed that these lieutenants were actually CIA informants and that Willis tricked Ajay into cleaning up evidence of the CIA's involvement in Kyrat because he believed that Pagan Min is no longer considered a threat to the US government. After this, Willis, claiming "Every patriot I know is a sonofabitch." (Referring to Ajay's father), throws Ajay out of the plane just as Ajay was asking information on Yuma, to which Willis responds, [...]"What I told you about Yuma...You can ask her yourself. " and leaves him hurt in the snow as Yuma's guards approach and take him to prison.

Against the wishes of his superiors in Washington, Willis travels to Hope County, Montana and enlists the Junior Deputy's help in recovering an "embarrassing" VHS tape from a bunker controlled by the Project at Eden's Gate.

Unlike Hurk, Willis does not appear in the game. If he is still alive, he would be 70 years old.

Though Willis doesn't physically appear in the game, he is called via radio by Sean McKay in the mission "The Deported," with the latter offering to sell Huntley WMDs and Viviro upon returning to the US. The old dog tag of Willis somehow ended up in Yara and became a charm for decorating weapons.

Willis is a committed patriot and a nationalist, telling Jason that there are only two kinds of patriots: "The people who hold their hand on their heart in a ball game, and those who fight for their country." He is highly cynical, frequently sarcastic, unashamedly rude, and totally unapologetic. It can be said that he is comically crazy, due to his absurd feats and his crazy way of expressing himself. Although clearly dedicated to his country and government, via his words and handbook notes Willis demonstrates a jaded outlook on just about everything, including his own country. For example, he describes Ajay as an "American on the inside but useful on the outside," implying that Ajay's status as a former American soldier makes him more useful as an agent in a foreign country, and then makes a derisive reference to Jason, calling him a "SoCal douchebag". He also displays an awareness and cynical view of himself to a degree, as he describes himself as a patriot but, as mentioned above, says that every patriot he knows "is a sonofabitch."

Regardless, Willis was quite unfazed even when in dangerous situations, indifferent to danger, calculating, and somewhat loyal or at least respecting of his deals/agreements such as when he helped Jason in his search for his friends, fighting off a large group of pirates until Jason came to assist him, and helping him to get to the Southern Island to kill Hoyt Volker. However, in Far Cry 5 he is prone to having his mind changed if the status quo changes as after The Junior Deputy helps him retrieve an embarrassing VHS tape, he abandons them after promising to help bring down The Cult as he was promoted to Chief of Staff, calling the cult "below his paygrade" 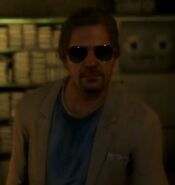