Wogah is a crafter of the Wenja tribe, and a secondary character of Far Cry Primal.

Wogah is a feral, dangerous, one-armed Wenja crafter - at once brilliant and completely deranged. Last year the Udam tribe massacred his village, captured him, and cut off his arm to feed on his flesh. Wogah staunched the blood flow and fashioned an ingenious device to break free from his cage. Ever since, he has lived the solitary existence of a hermit - chattering to himself and crafting traps to kill the violent Udam.

Wogah believes he is now the last surviving Wenja of the Udam attack. When he discovers the existence of other Wenja, his world is turned upside down as he rededicates his life to helping the tribespeople he feared he'd lost.

Wogah is an extremely intelligent and talented crafter, and despite the loss of his arm, he was able to create a device that allowed him to escape the Udam, as well as a variety of weapons and tools that allow the Wenja to grow stronger. Wogah can also craft totems that symbolize the strength and the unity of the Wenja. 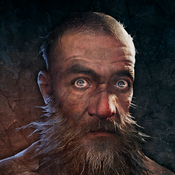 Add a photo to this gallery
Retrieved from "https://farcry.fandom.com/wiki/Wogah?oldid=99014"
Community content is available under CC-BY-SA unless otherwise noted.