Fascist state under a military junta

Yara, officially the Republic of Yara (Spanish: República de Yara) is a sovereign state located in the heart of the Caribbean and the main setting of Far Cry 6. Yara is a tropical island with a diverse geographic environment, consisting of sandy beaches, inland jungles, rocky mountains and sprawling cities and villages. The largest city and capital of Yara is Esperanza, located at the northern point of the island. The country is considered a fascist state under a military junta led by Antón Castillo.[1] The Yaran military under Castillo’s regime is the Fuerzas Nacionales de Defensa. The national anthem of Yara is Himno Nacional Yarano.

Yara was previously considered a prosperous and peaceful nation.[2] In 1967 , a revolution occurred, when the father of Antón Castillo was El Presidente. The revolution and military coup that resulted in Antón's father being executed right before his eyes. In the 47 years that followed, Yara experienced economic decline, political and social instability and growing national debt. Eventually, Antón himself was elected El Presidente, on the promise of rebuilding Yara.[3] However, Antón soon cracked down on political dissent, fundamental freedoms and democracy in the country, with anyone who dared to speak out against his methods or regime being sent into forced labor camps.

Yara has suffered under international economic sanctions for decades, leaving it stuck in the past technologically, and its people impoverished and divided. Under the leadership of Antón Castillo this has only been exacerbated leading to a tightening of control (“iron grip”) on the island.[4] In addition, Yaran Pesos are considered worthless on the global exchange market by 2021.[5]

Yara had previously been a democratic state, under a presidential republic system, however after the election of Castillo as President many of these institutions were reformed or banned, elections were no longer fair nor free and the military took a central role in Yaran political and social life.

Castillo began to structure his new state informed along the principles of fascism (conservative authoritarianism) with full power vested in him under the state’s military junta as “El Presidente” (Spanish: The President).

Castillo also began to groom his son, Diego Castillo, when he was 11-12 years old to succeed him as the President of Yara. Demonstrating his ambitions to start a line of hereditary leadership in the state.

Yara's cabinet is composed of numerous Ministries, which work under Anton Castillo. The most important and well-known of these is the Ministry of Culture, led by María Marquessa. However, other Ministries are mentioned, most notably on billboards.

Here are the known Ministries:

Antón and his son, Diego, began a bloody and oppressive campaign in an attempt to restore Yara to its former glory. Antón has enforced sanctions in Yara and limited trade with foreign nations, deployed the Yaran military throughout the nation to carry out his plans and keep citizens in check, and restricted mobility within the country through controlled checkpoints. In addition to this, in order to make the country more appealing to foreign investment and to bypass international sanctions, the Castillo regime has begun research into an anti-cancer drug known as Viviro, produced from Yara's tobacco plantations. To help distribute Viviro globally, the Castillo regime has sought the assistance of Canadian business magnate Sean McKay to manage Viviro exports overseas. However, the production of Viviro relies on slave labor in the form of Yara's poor forced to work in tobacco plantations, and it is implied that Viviro's success rate in mitigating cancer is dubious at best. The excessive abuses and brutality of Castillo regime sparks a revolution in Yara again, led by various groups of guerrillas who oppose Antón, especially the Libertad.

In this case, Yara become an unstable failed state just as Antón Castillo predicted, as the Libertads would most likely repeats the same mistakes of 1967 revolution, which once again plunging Yara into economic decline as they do not seemed to know how to manage the country after their successful revolution, worse, unable to stabilize the country as insurgencies continue wrecking havoc.

Yara is divided into 5 main regions which are further divided into smaller districts, referred to in-game as Provinces. Within Provinces, road signs and painted rocks mark the borders of the even smaller Municpalities. These regions are each controlled by important figures of the FND. 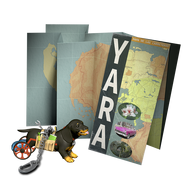 The Flag of Guerrilla