“These two outsiders are guests of Noore, and therefore guests of King Min. Allowing them to reside in Kyrat is an act of unimaginable kindness. Their gratitude can be seen on their faces each and every day.”
King Min's Kyrat

Yogi & Reggie are two characters who appears in Far Cry 4.

Meet the two lads from… somewhere, Reggie and Yogi were always involved in petty crimes and petty behavior together, proving inseparable in life and in jail. At an early age, they came to the quick realization that they were neither brutal enough nor violent enough to stage robberies or act as muscle for the local gangs. They were, however, good at improvising, and that meant running scams and running fast.

They originally found their place in Bangkok where they went as tourists on a gap year traveling the backpacking scene, but they stayed around long after the party ended. They worked bars in the season, and stayed in the off season, doing whatever they could to avoid going back home. It wasn’t long before they started selling weed to the tourists and eventually picked up the Guru routine and became stalwarts of the scene before they inevitably got out of their depth and into enough trouble to book it off somewhere else.

Reggie and Yogi traveled the world running the same type of scam over and over again. They’d open shop as mystics and mediums, move “mind expanding” drugs from their operation, and bilk spiritual-minded Westerners of their money before vanishing and moving on.

Reggie and Yogi eventually landed in Kyrat, and that’s when everything started going sideways. They were making good money off desperate Westerners looking for the promise of Eastern peace when Noore took an interest in them. She helped set up their client profile and funneled richer Westerners to them. They, in turn, bilked these whales of money, gave them drugs to put them in compromising positions, and helped Noore gain more blackmail material. However, the two conman know when they’re in over their heads, and they want out.

Currently, Reggie has a handle on the logistical side of things, and Yogi is on the creative end. Reggie has adapted to life in Kyrat much more easily than the more sensitive and emphatic Yogi, but they are too close to ever part ways. Where one goes, the other follows.[1] Yogi also by appearance is clearly a reference to Joe Strummer, the front man of The Clash. Precisely, he looks like Strummer in the music video for "Rock the Casbah". 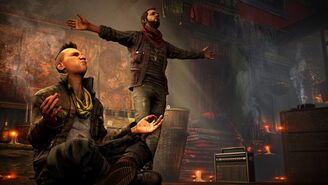 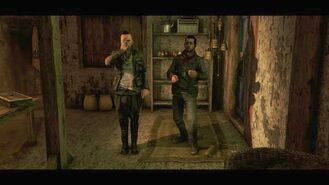 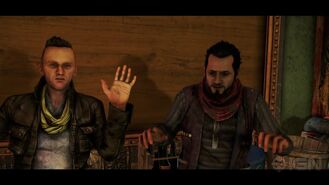 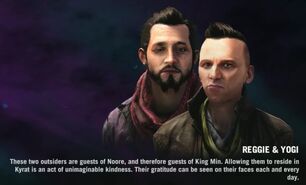 Retrieved from "https://farcry.fandom.com/wiki/Yogi_%26_Reggie?oldid=98989"
Community content is available under CC-BY-SA unless otherwise noted.